Adam Pendleton. Who Is Queen? 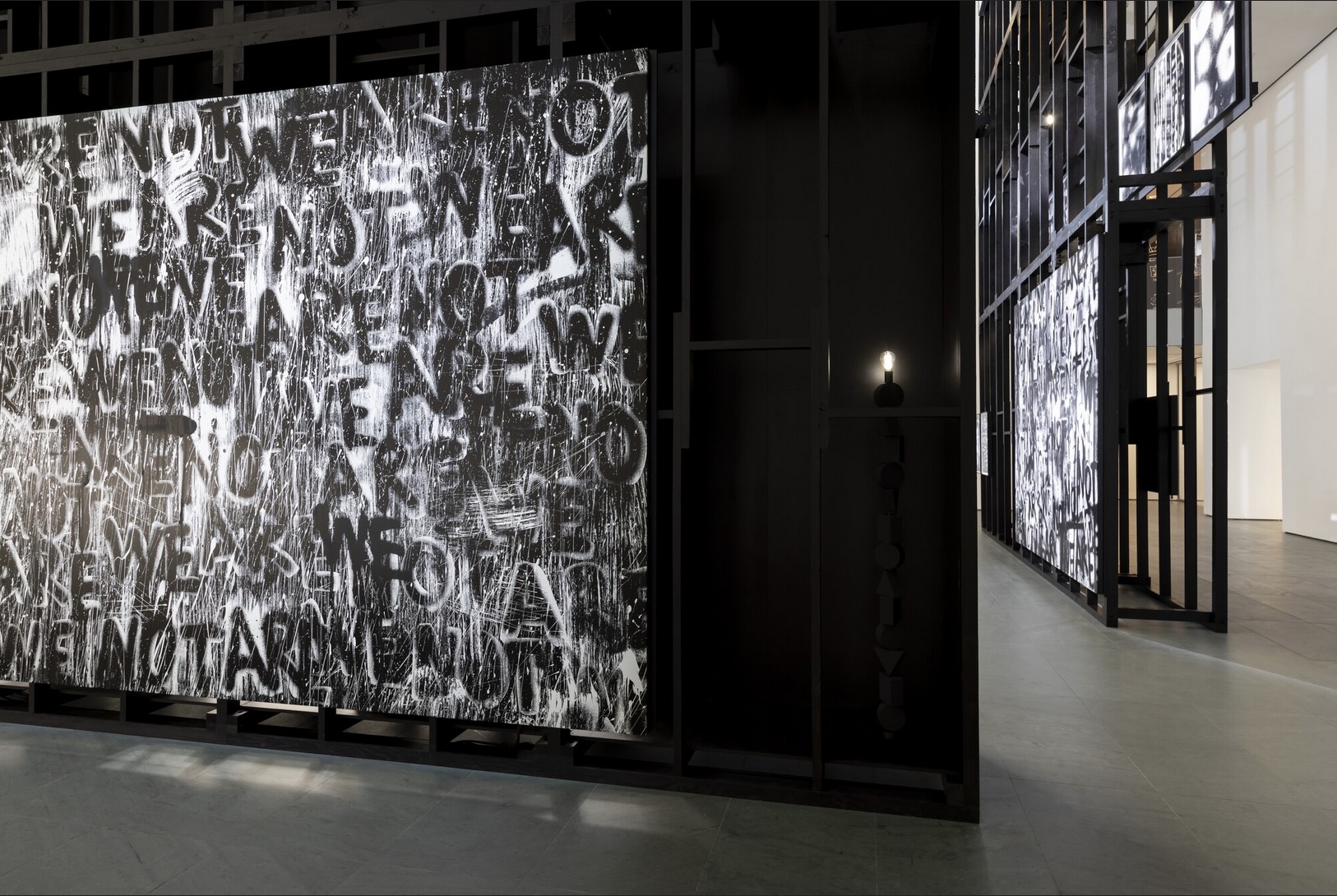 Adam Pendleton. Who Is Queen?

Adam Pendleton: Who Is Queen? transforms MoMA’s Marron Family Atrium into a dynamic arena exploring Blackness, abstraction, and the avant-garde. In his monumental floor-to-ceiling installation, Adam Pendleton has created a spatial collage of text, image, and sound—a total work of art for the 21st century.

Who Is Queen? is anchored by three five-story black scaffold towers that resemble the balloon framing typical of American homes and that serve as supports for paintings, drawings, a textile work, sculptures, moving images, and a sound piece. In the paintings, Pendleton creates layered fields of unresolved text and gestural marks, built up from spray-painted and brushed originals that have been photographed, photocopied, and enlarged for screenprinting. The drawings feature sketches and visual “notes,” and, at times, reproductions from the artist’s library of books. Pendleton’s visual language challenges legibility, continuously writing and overwriting itself.

Pendleton’s latest video portrait, So We Moved: A Portrait of Jack Halberstam screens at 12:30 and 4:30 p.m. daily, alternating with two moving-image works that function as notes on the embattled Robert E. Lee monument in Richmond, Virginia, and Resurrection City, a 1968 ad-hoc city set up on the national mall in Washington, DC. Resurrection City has played an influential role in Pendleton’s wider investigation of alternative structures and social formations. Finally, a sound collage anchored by a reading by the poet Amiri Baraka, a recording by composer Hahn Rowe, and a recording of a Black Lives Matter demonstration in Manhattan is interwoven with musical fragments from a range of composers and musicians. Dialogues organized by Pendleton featuring pairs of artists, writers, and thinkers will be released online monthly, and incorporated into the sound installation, which shifts and changes over the course of the exhibition.

Challenging the traditional role of the museum as a repository for a fixed history, Who Is Queen? collages multiple voices and cultural touch points to generate new relationships between traditionally incommensurable subjects. As the artist states, the work “is not black or white. It articulates the ways in which we simultaneously possess and are possessed by contradictory ideals and ideas.”

The audio series for Adam Pendleton: Who Is Queen? is produced for MoMA by Lizzie Gorfaine, Producer, and Kate Scherer, Manager, with the support of Olivia Rousey, Intern, Performance and Live Programs