Carlos Garaicoa 'A City View from the Table of My House' 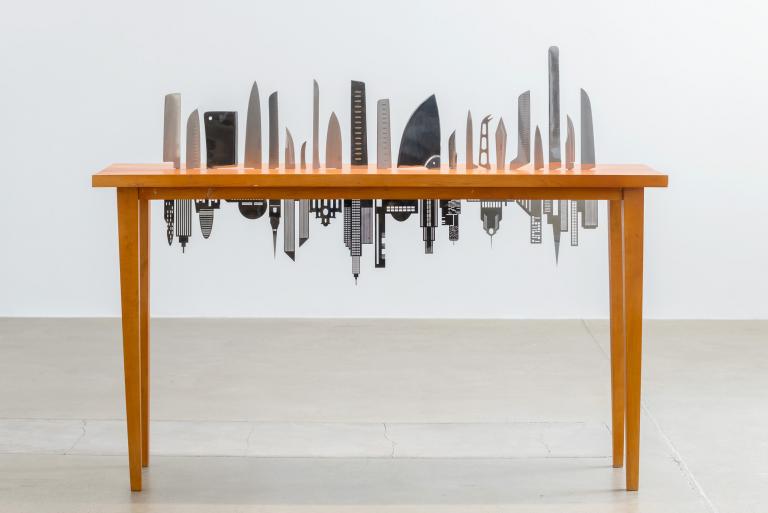 Carlos Garaicoa 'A City View from the Table of My House'

Based in Madrid and Havana, Carlos Garaicoa originally trained in thermodynamics and later in painting, lending him a unique perspective on the relationship of social and historical structures to architecture and urbanism. Throughout his prolific artistic career he has poignantly signaled the ways in which more abstract phenomena like power and entropy affect the tangible universe like cities.

For his solo exhibition A City View from the Table of My House, Garaicoa will present a very particular retrospective exercise, which studies the format of the table as one of the most fertile substrates for his artistic production. In the artist’s words, “the table has functioned as a support and as a geography, and also as an essential element of our domesticity, as a microworld and a territory abstracted from reality to deposit dissimilar stories that try to define the existence and durability of our lives, immersed in the cities and spaces we inhabit.”

The works presented in the exhibition, which range from 1998 to the present, introduce a plethora of other media that the artist has employed — paper, thread, glass, wax, metal, and video — that serve as metaphors for the diversity and flexibility of urban space, as well as the dangers of it. While some of the tables present factual representations of cities, others operate at symbolic or conceptual levels. Garaicoa considers not only the formal aspects of space, like volume, density, or shape, but also the immaterial, political, and historical bonds that constitute the notion of a city — even when they are problematic.

A City View from the Table of My House is a unique opportunity to study one of the most fascinating artists from Latin America who brings a powerful, holistic reflection on the fragility and beauty of the spaces in which we coexist.