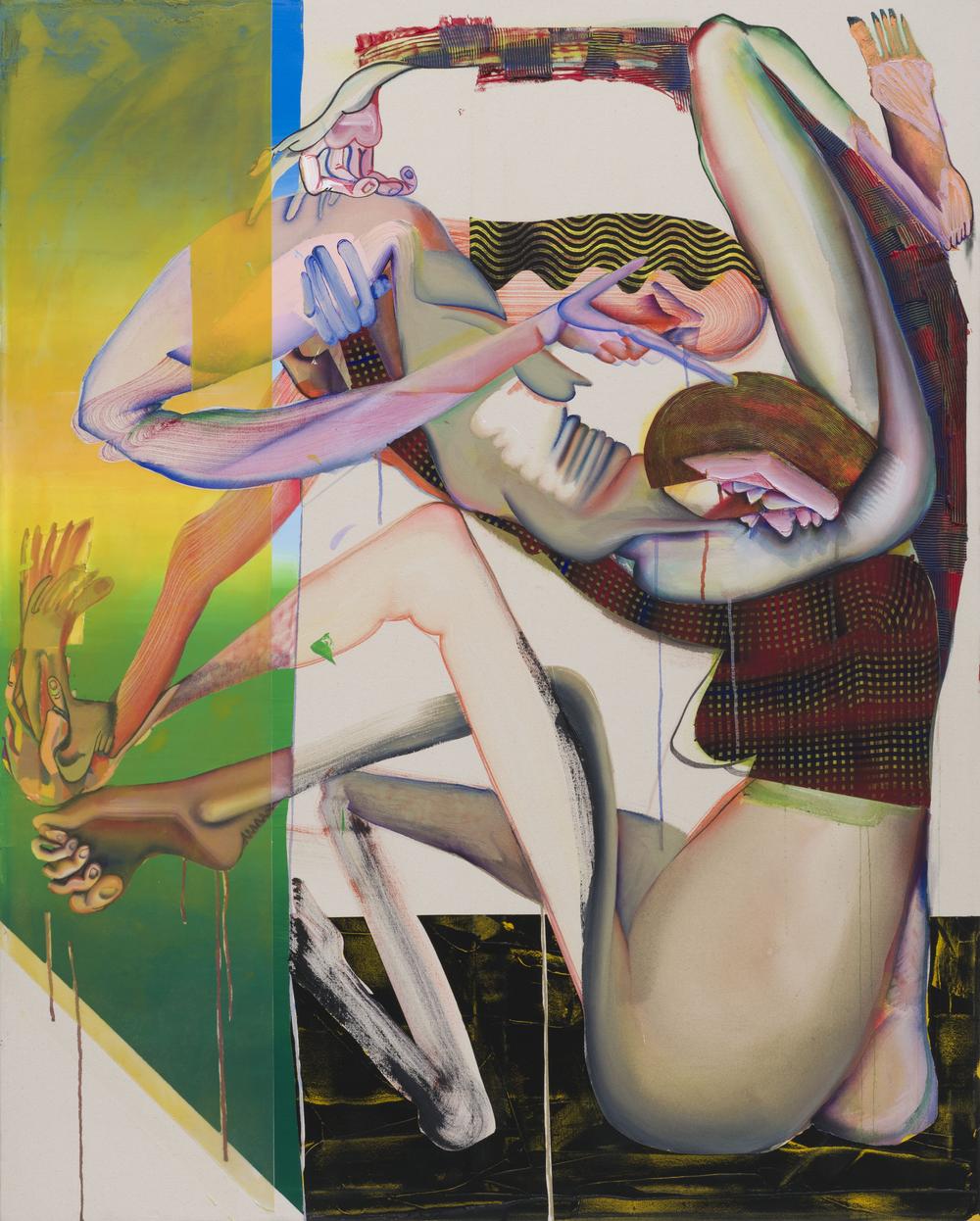 This spring, the Museum of Contemporary Art Chicago presents a solo exhibition by the celebrated Los Angeles-based artist Christina Quarles. Quarles' colorful figurative paintings are filled with a sensual labyrinth of bending and twisting limbs and faces merging with ambiguous objects and abstract patterns. Her paintings confront themes of racial and sexual identities, gender, and queerness, as well as the pleasures and pressures of the social realm. The most comprehensive presentation of her work to date, Christina Quarles is on view at the MCA from April 4 to August 23, 2020, and brings together a selection of her most recent work from the last three years along with four new paintings and the debut of a large-scale acquisition that recalls trompe l'oeil painting.

Quarles is leading a growing movement among contemporary artists who are returning to figuration in order to address issues of identity and representation in society today. Her singular approach to figuration, however, renders dancerly, translucent bodies in fabulist environments. Quarles identifies as a biracial, queer, cisgender woman and is particularly interested in the tension between the rich and multilayered experience of one's inner life and how a person is perceived based on what is visible to others. Quarles's work explores the universal experience of existing within a body, as well as the ways race, gender, and sexuality intersect to form "multiply situated" identities.

A centerpiece of the exhibition is a large, brightly colored work inspired by trompe l'oeil, a style of painting that can trick the eye into an illusion of realistic imagery. Quarles's trompe l'oeil environment spans wall-to-wall and features common patterns such as checkers and stripes, but with her own artistic logic where brushstrokes are imprecise, figures are fragmented and cast artificial shadows, and planes of varying materials overlap. Quarles's unique approach to the trompe l'oeil technique playfully exposes the perceived boundaries between reality and illusion, drawing the viewer in beyond surface level.

The exhibition also features several never-before-seen works on paper, such as Magic (Never Believe, It's Not So), I Don' Wanna, Be Funny Anymore, ...And Thus, ...And Yet..., and Love Is... These ink drawings imagine figures entangled in contorted positions with snapshots of intimate conversations, accompanied by handwritten bits of text from song lyrics.

In works such as Peer Amid (Peered Amidst), Quarles paints figures that transgress lines, surfaces, and other bodies, experimenting with and transcending boundaries. Their body language captures a multitude of emotions--one head hangs limp, a second face lifts upwards, and their naked limbs intersect and stretch in several directions. With skin tones of magenta, lilac purple, and gray, and hair that is bright yellow and orange, the figures' ambiguous visual cues defy categorizations of gender and race.

In her working process, Quarles begins with giant, gestural brushstrokes that form the figures, then adds the scenes and architectural details around them. With the figure as the starting point, Quarles shows how inner, emotional life shapes the imagined exterior world. Foreground and background elements overlap throughout her work, including in Yew've Got Yer Gud Things, n' I've Got Mine (Split) and Underneath It All, and disrupt familiar ways of distinguishing people from their surroundings. Expressive hands, feet, and limbs appear to emerge in and out of blue skies, salmon-colored clouds, and leafy green landscapes, to reveal permeable connections between bodily experience and physical space.

ABOUT THE ARTIST
Christina Quarles was born in Chicago, Illinois, in 1985 and raised in Los Angeles, where she currently lives with her wife. She received a BA in philosophy and art from Hampshire College and a MFA in painting from Yale University. Quarles received the inaugural Pérez Prize from the Pérez Art Museum Miami, along with the Rema Hort Mann Foundation Emerging Artist Grant, and two J. Paul Getty Foundation Grants. She completed residencies at Fountainhead and Skowhegan School of Painting and Sculpture. Her past solo exhibitions include But I Woke Jus' The Same at Regen Projects, Los Angeles; In Likeness at The Hepworth Wakefield, United Kingdom; and Christina Quarles at Pond Society, Shanghai, China.

EXHIBITION CATALOGUE
A fully illustrated catalogue accompanies the exhibition featuring a foreword by MCA Director Madeleine Grynsztejn and three authors who provide a compelling framework for understanding the metaphors and meanings Quarles conjures through her brushwork. Exhibition curator Grace Deveney presents critical insights into Quarles's life and practice. Mark Godfrey, Curator of Contemporary Art at Tate Modern, and Uri McMillan, Associate Professor in the Department of African American Studies and Department of English at the University of California Los Angeles, have each authored essays that delve into the ways identity markers such as race and sexuality operate in Quarles's work and reshape conversations surrounding the canon of art history. In addition, the catalogue features photos taken of Quarles's studio with captions from the artist describing her artistic inspirations, including found objects, quotes, and studies for her paintings.