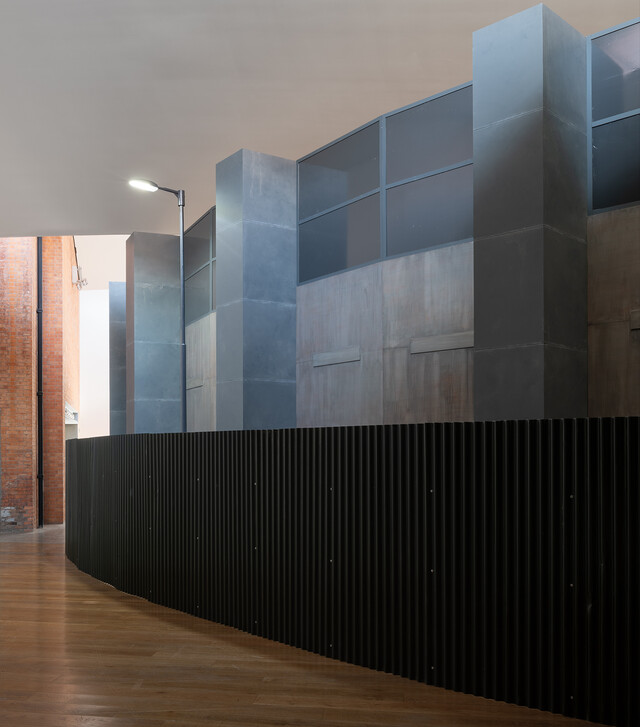 Doug Fishbone is an internationally renowned artist who creates projects and exhibitions that unearth, question, and examine societal misconceptions through humour and manipulation of context. His film and performance work is heavily influenced by the rhythms of stand-up comedy.
In his first solo exhibition in Ireland, Please Gamble Responsibly, commissioned by the Crawford Art Gallery, Fishbone creates an architectural spectacle—mirroring the housing and rental market—and invites visitors to wander around his “ghost estate.”

Replete with broken windows, boarded up balconies and surrounded with shabby corrugated fencing, it offers those that enter through the break in the fence more than an abandoned half-built interior. Inside, Fishbone presents a free-wheeling video on the topics of money and real estate—forces that drive the global economy but expose home owners and investors to perpetual systemic risk of disaster.

“Ghost estates”—housing developments built during the speculative Celtic Tiger boom of the Irish property market, and left unfinished when the credit bubble fuelling it ground to a halt in 2008—were once Ireland’s most visible signs of a financial system spun out of control. Though most of the estates were wound down during the ensuing bail-outs and period of austerity, and discussion of them is now largely a footnote, the Castle Lake apartment complex in the suburban outskirts of Cork remains a lasting remnant of this dubious period in modern financial history.

A symbol of the dashed expectations of globalisation, where ill-advised business models collide with reality to devastating effect, it calls to mind Fordlandia, Henry Ford’s doomed attempt to build a rubber plantation in the Brazilian Amazon in the mid-20th century. Like Fordlandia, which never produced anything despite a massive investment, Castle Lake now sits idle and overgrown in the countryside, an instant ruin that is yet to welcome tenants. How instability and collapse are coded into the very way modern money works, from the Nixon Shock in 1971 to the ongoing corporate bailouts of today, fuels a system far dodgier than it seems.