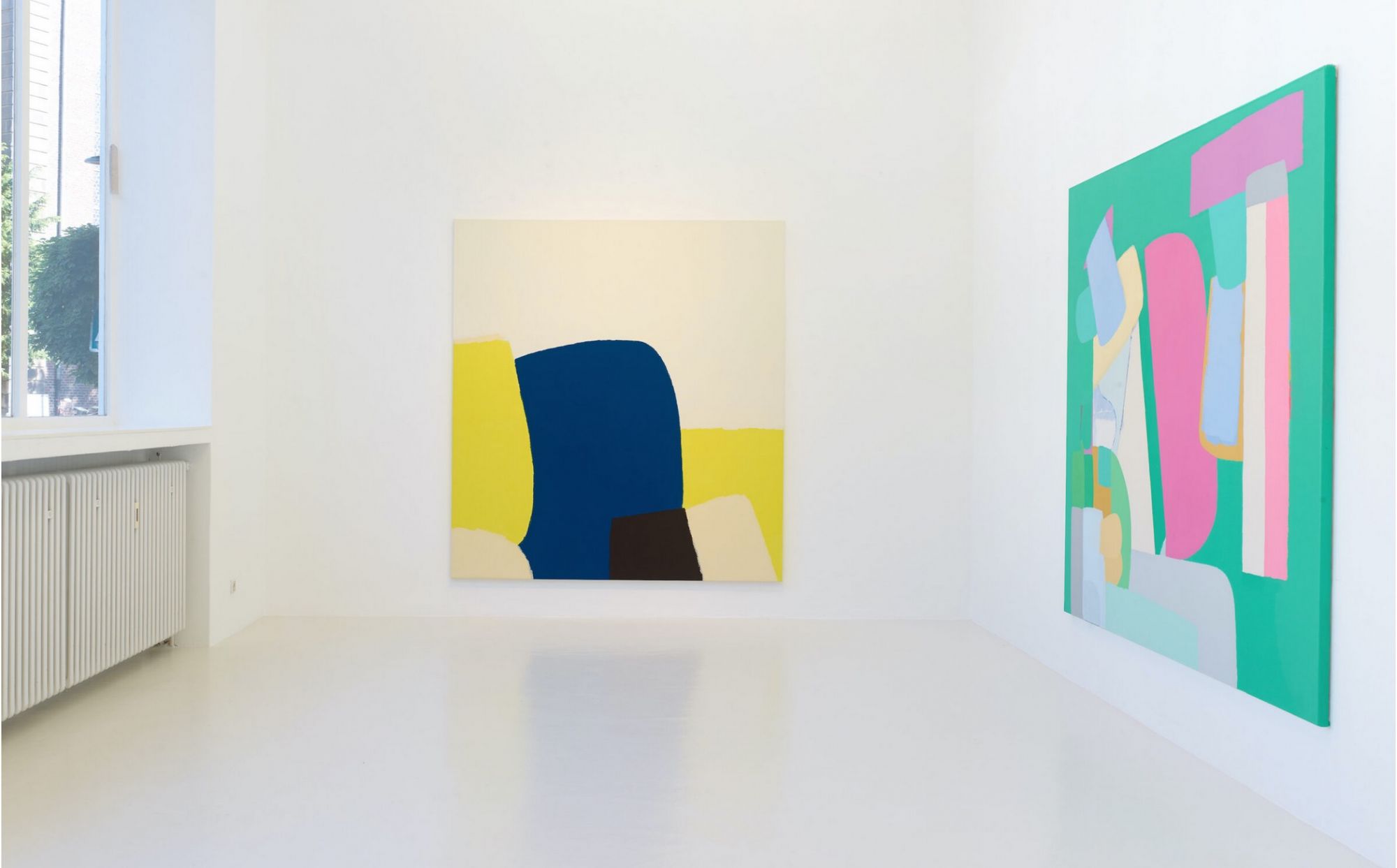 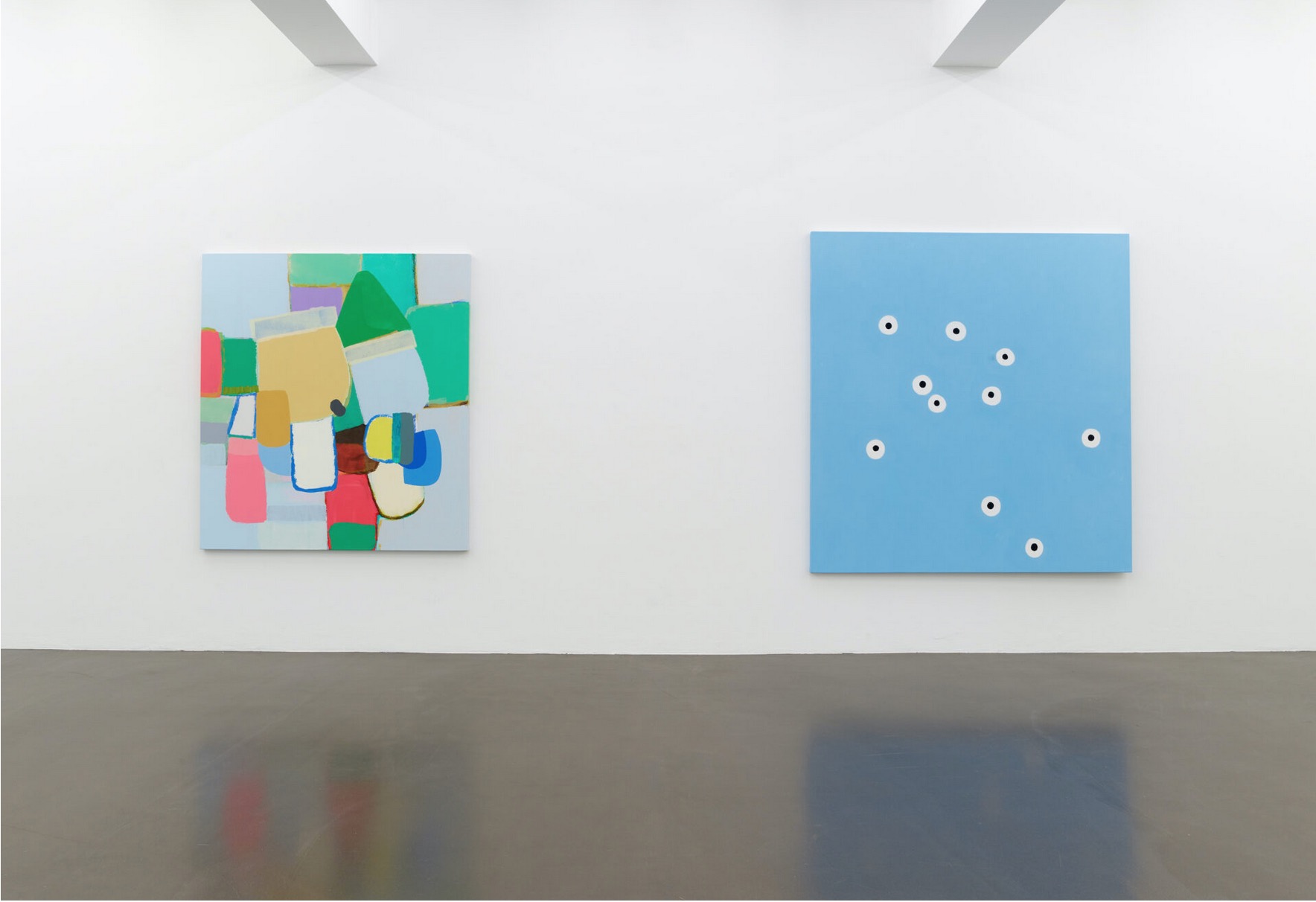 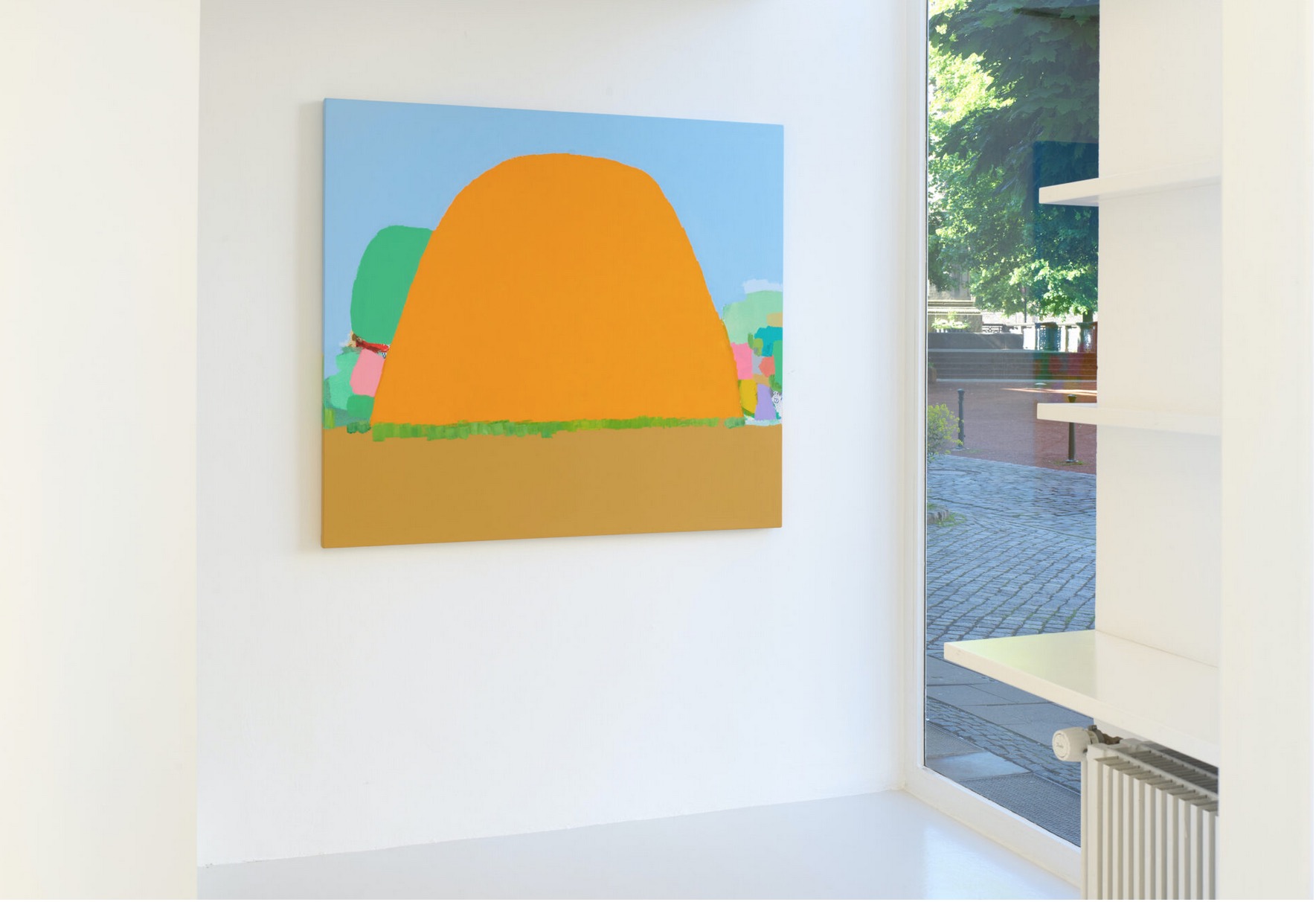 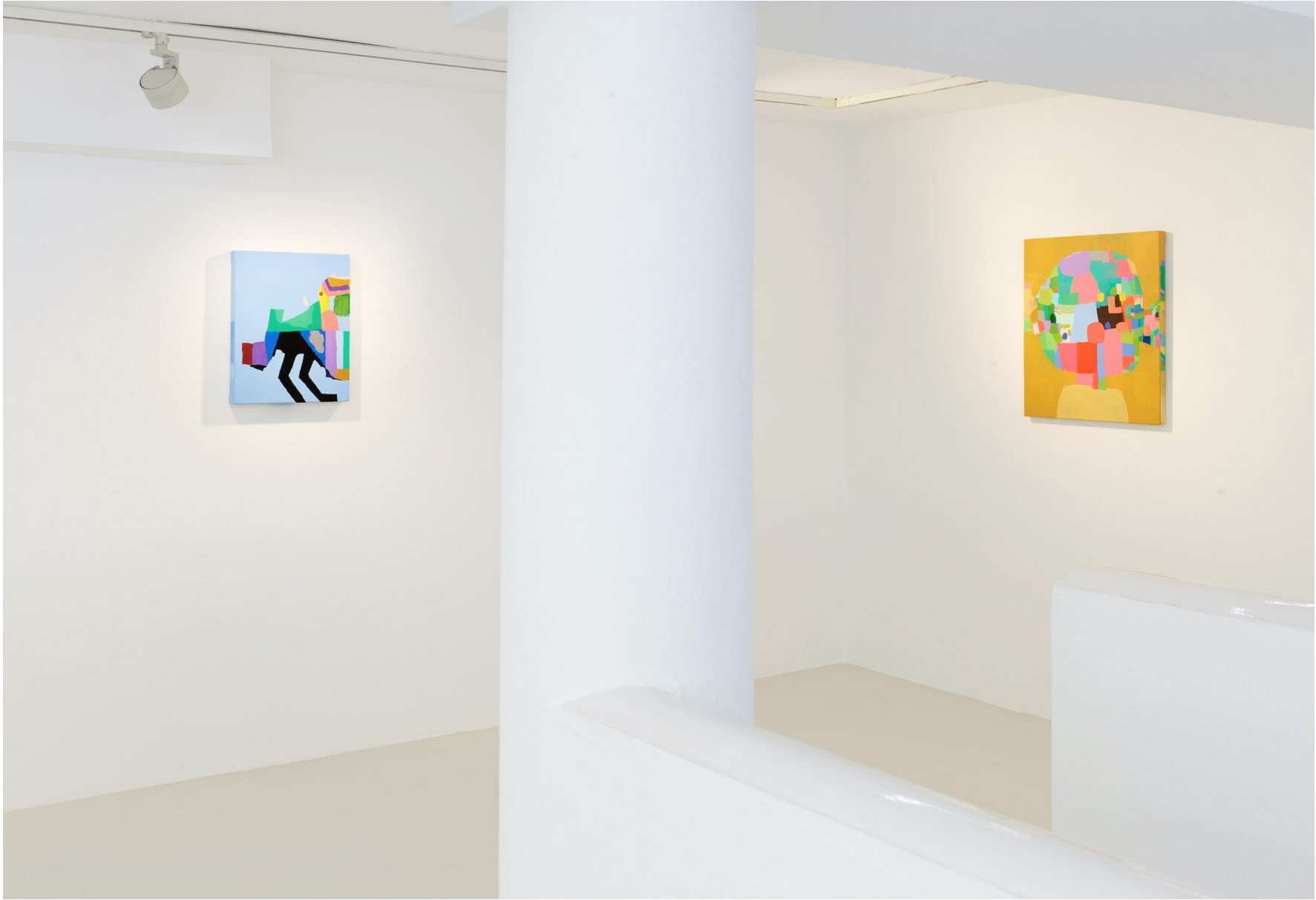 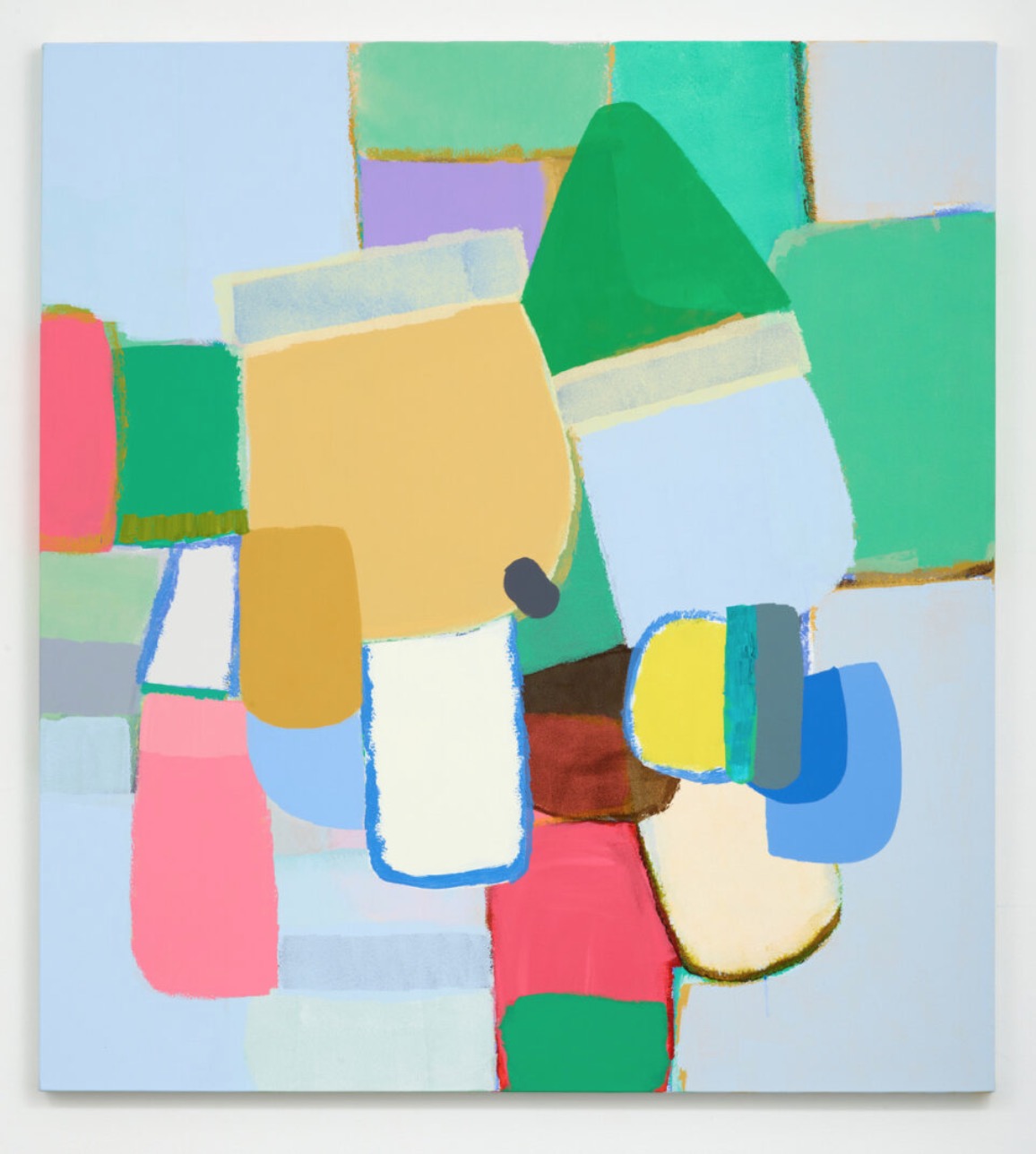 What can you tell us about your new series of paintings?

For me personally these paintings have a special relationship to their tools – so basically of line and form. Before, the color would create the form. The colors would grow until they create forms that would interrelate. Now the form is more related to the line and to the question of how they overlap. So, in a way, these works are more related to my site-specific works: There is a certain looseness between the forms, a kind of blurriness of the limits that is gradually happening.

Which might be a reason that they seem so playful.

Yes, there is a lot of movement in the work. I have always been interested in that because it connects to urban spaces, to the city as an organism. And there is always some sort of internal movement – a certain musicality, if you will.

There are also these little cartoon-like figures…

Those elements create a moment of narrative in paintings that sort of seem like landscapes. They are open to interpretation, in between forms of humans and plants. They kind of populate the spaces they are in.

You are talking about landscape, even though your works don’t have a landscape format.

That is true. There is this notion similar to Etel Adnan who speaks of the landscape as poetry. For me, there is some sense of that in my work. Even if the forms are not building up into a horizon, I still see a landscape in them. As I spent so much time at home last year, I was looking a lot at my garden. Before, I was travelling a lot, so the floating forms in my paintings related to this feeling of living on the move. But now I was very much going inwards, building up a relationship to my house and my garden, which for me is actually a piece of work that is constantly growing. It has its own timing, colors and forms are changing all the time. So, I guess what I’m trying to say is that landscape is a very broad idea.

In fact, nature offers all sorts of abstractions as well as figurative elements – a variety which plays a crucial role in your work: Sometimes it’s just shapes that leave more space for interpretation, sometimes these shapes build an actual figure or a setting in nature.

Yes, and there is also something about the constant possibility of change, and also about a slowness of this change, which is the case in plants. Here in Costa Rica, we only have two seasons, the dry and the rainy one. The plants go up and then they go down a bit and then up again, which is kind of like breathing. That aspect of a landscape that translates into certain vibrations and temporalities has a beauty which I like a lot. This feeling of a place, of a natural circle that stands still and is still moving and growing, started to feed the work very directly.

Definitely. I really enjoyed the stillness of last year, as I suppose many artists did. It gave me space and silence and a more serene approach to the work. And I guess it gave me time to think how to incorporate the technique of my site-specific work into my studio practice.

And stillness doesn’t mean dullness. There is a large mixture of ideas and motifs in your new works. It almost feels like they don’t belong to the same series but come from different times.

Exactly! I would say they express some sort of confusion. I was not trying to create something that made complete sense. It was important to let go of the group of works that were more linear. There was something about creating paintings of different directionalities in order to calibrate your perception. The work with the blue background and the small black-and-white circles does exactly that. In a way it could be seen as a pop art piece but it also relates to the rest of the works by bringing your eyes to the point… to a certain tension and visual focus to then release it again. Also, there is some calibration of movement, atmosphere and psychology of the entire show. I was very open to allowing a bit of confusion, not having a unity. In a sense, this represents just different aspects of something that has always been present in my work. Which is why it is so important to understand that these works are all interconnected. I see them as a language in itself – the paintings are having some sort of a conversation amongst each other.

So how did you discover that painting is your language?

I saw these amazing books about modernism at my grandmother’s house – that’s the magic of books, especially living in a small country. Perhaps I felt a sense of refuge and belonging, especially not fitting very well into society. So, it seemed very natural to start painting myself, and I just never stopped. My first impression was Roberto Matta, whom I understood as an Abstract Expressionist, even though he belonged to the Surrealist movement. I also felt connected to the late Matisse, and then also to Raoul de Keyser, Etel Adnan, and Amy Sillman. They all deal with abstraction as well as with landscape, and their forms and colors transform into poetry. And at the same time, they have a very straightforward relationship with the tools of painting. So does Hélio Oiticica who is also very important for me.

Something which sticks out in your work is the absolute brightness of colors. They shine really intensely, there is not a single dark work.

There must be something about the light – it is very intrinsic to me. I made an effort to make works that are less bright but in the end they never were. I have learned to let go of trying to make sense out of it. I’m very intuitive in the way I work. I always let intuition take over in order to give some balance to the mental part.

The way you deal with colors offers a link to classic modernism – an easiness and clarity that stands for a utopia that in the end was never fulfilled. You don’t find this hopeful approach in traditional painting.

And at the same time, modernism can be a trap. For example, South America has a hard time escaping the tradition of geometric modernism, anything out of this idea was considered not serious enough which conveys quite a rigid idea. But I can’t stop looking at nature here. Nature is what we have. I couldn’t create a geometric abstraction out of plants. The energy coming out of biometric forms, as I find them here in Costa Rica between the two oceans and the sky, are much more interesting to me than any rigid pattern.