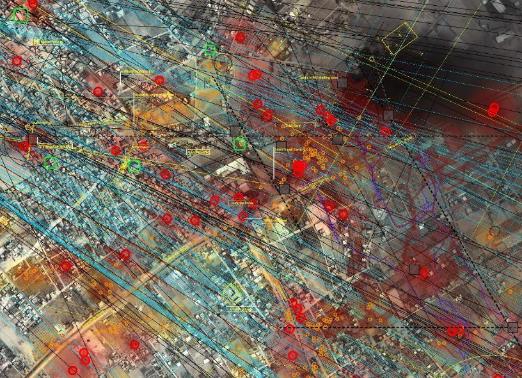 In the fifth exhibition in The Architect’s Studio series, Louisiana Museum of Modern Art presents the multidisciplinary research agency Forensic Architecture. Operating at the intersection of architecture, art, journalism, law and activism, Forensic Architecture investigates, maps and documents human rights violations in the context of a wide range of global conflicts.

Over the last six years, Louisiana’s The Architect’s Studio series has opened a window on architects and studios that aspire to more than well-designed architecture. In Forensic Architecture - Witnesses, Louisiana presents a research group, led by architect Eyal Weizman, that includes not only architects but also artists, software developers, journalists, lawyers and animators. Conducting forensic investigations, the studio can best be described as the fusion of an architecture studio and an investigative journalism unit.

Forensic Architecture gives a voice to materials, structures and people by translating and disseminating the evidence of the crimes committed against them, telling their stories in images and sound. When an incident of violence and its witnessing are spatially analysed, they acquire visual form. Accordingly, Forensic Architecture is also an aesthetic practice studying how space is sensitised to the events that take place within it. The investigation and representation of testimony depends on how an event is perceived, documented and presented.

Witnesses Unlike established forms of crime and conflict investigation, Forensic Architecture employs a number of unconventional and unique methods to shed light on events, based on the spaces where they took place. This retrospective exhibition focuses on the act of witnessing as a spatial practice. Witness testimony, which sits at the centre of human rights discourse, can be more than viva voce, oral testimony in a court. Any material, like leaves, dust and bricks, can bear witness.

Forensic Architecture investigates and gives a voice to material evidence by using open source data analysed using cutting-edge methods partly of their own design. Using 3D models, they facilitate memory recollection from witnesses who have experienced traumatic events. The objective is to reconstruct the ‘space’ in which the incident in question took place and then re-enact the relevant events within this constructed model. The most important sources tend to be public: social media, blogs, government websites, satellite data sources, news sites and so on. Working with images, data, and testimony and making their results available online while exhibiting select cases in galleries and museums, Forensic Architecture brings its investigations into a new kind of courtroom.

Louisiana’s architectural exhibitions are supported by Realdania – a philanthropic association.