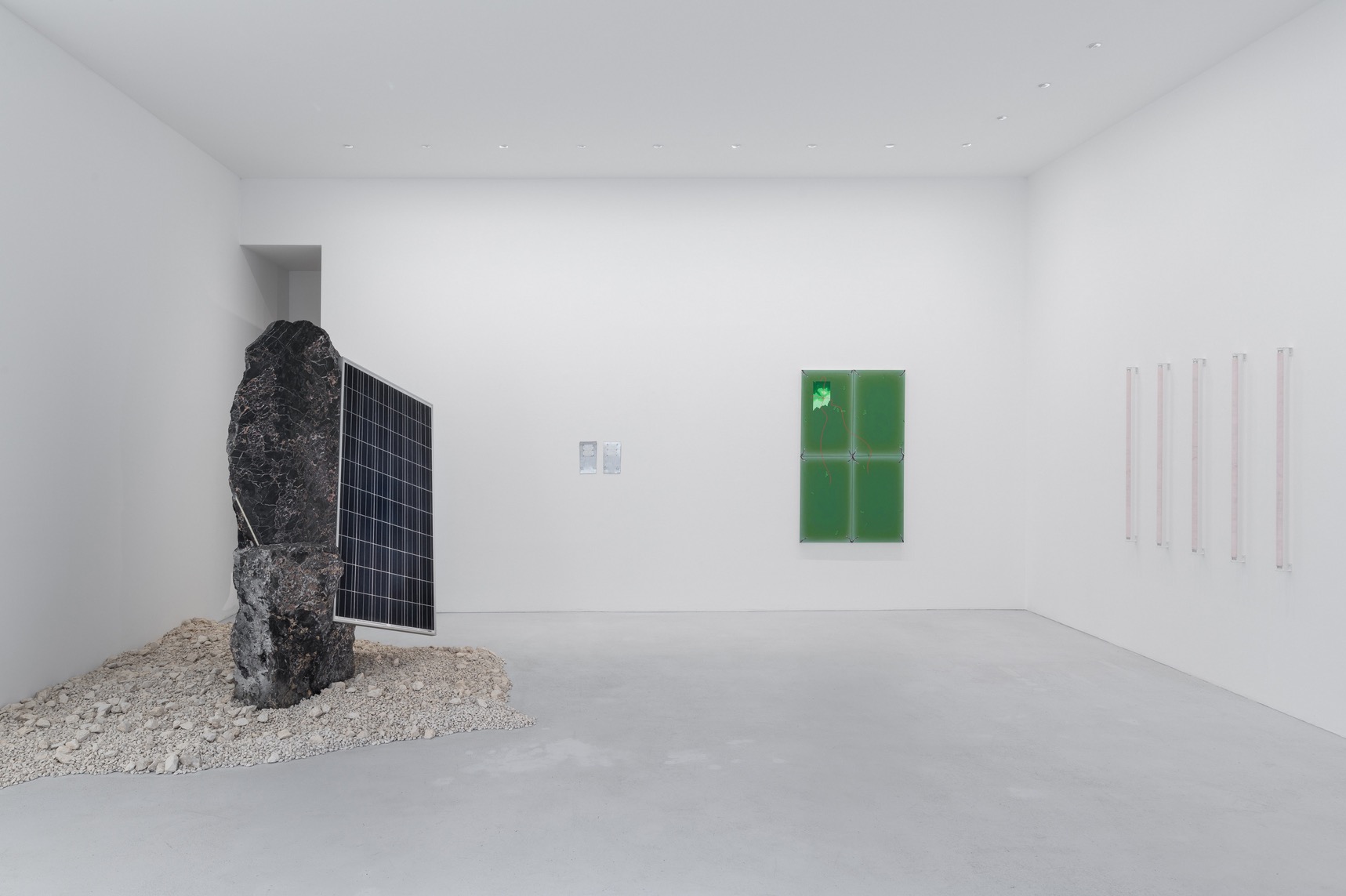 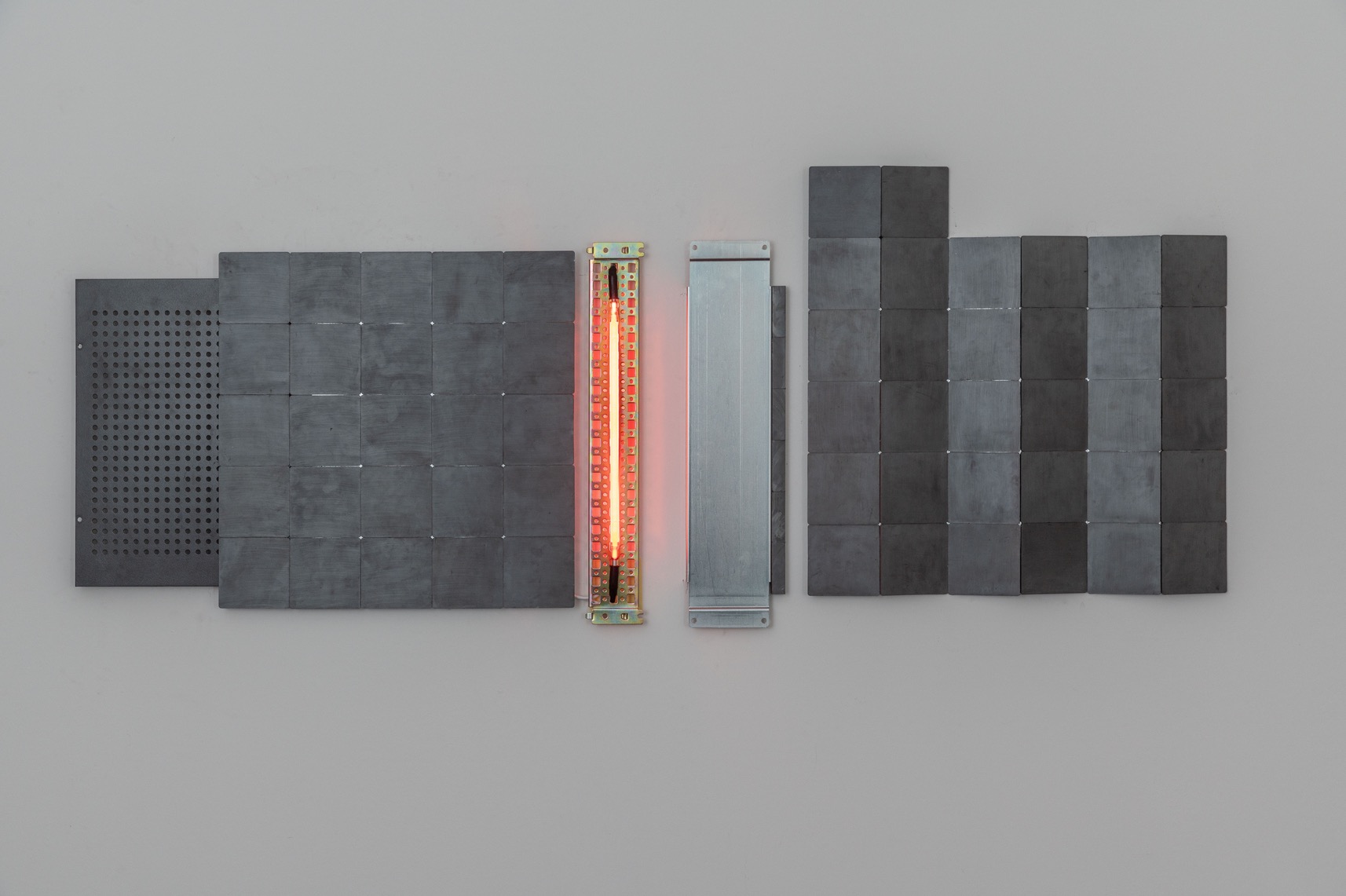 The international group exhibition inventing the past follows directly in the footsteps of the previous presentation entitled chasing another tomorrow. This second chapter illustrates a temporal change in perspective. This new point of departure presents us with a fictional narrative of the future, and by experimenting between time horizons, exposes the view of present systems and structures. The artistic positions are united in their conceptual approach, as well as in their questioning of the technological effects on human existence.

The exhibition traces the formal issues of conceptual art of the 1970s from the perspective of a younger generation of artists. Reflecting upon the current times, technological progress is put in relation to the high sensitivity of our natural environment. The ties between people, technology and nature reveal the field of tension from which the works draw a complex significance, amassed out of technical components, geometric shapes and natural elements. The gallery is transformed into a kind of mystical landscape, in which natural and technoid elements enter into a dialogue and allow various different histories to be written.

As one of the pioneers of post-minimal art, Keith Sonnier revolutionized sculpture in the 1970s and was one of the first artists to connect neon and the new technologies of his time, helping to materialize the spatial and cultural logic of these systems in real space through the unique perceptual properties of neon light. For Sonnier working with light was closely connected to new communication structures and the radiating waves of neon a way to visualize a world where distances become smaller and communication is possible in an instant. The exhibition presents how the artist increasingly experimented with light and neon as a material in his practice.

Central to the exhibition is Haroon Mirza‘s installation Standing Stones (Solar Symphony 8), which combines technology and references from ancient cultures. A solar panel is diagonally attached to a large black stone sculpture, across from which a smaller stone stands in opposi- tion. While tracking the sun‘s movement across the sky, the solar panel generates electricity, powering a series of LED lights and a speaker. Mirza’s particular fascination for electricity as a material is based in his interest in music and sound, which are repeatedly utilized as determina- tive media in his artistic work. In addition to high-tech elements, the work also pertains to ancient rituals, referring to monoliths and stone circles. The work Stonehenge, probably his most famous example, was last exhibited in the park of the Museum Tinguely in Basel.

The works of the recurring Venice Biennale participant Neïl Beloufa combine a wide variety of materials and techniques and address our contemporary society, which is permeated by digital technology, its value systems and representational strategies. In his wall objects from the series The Moral of the Story, the artist uses classical narrative codes to create an allegory of the contemporary world that, with references to capitalistically structured actions, the intimacy of the family, environmental catastrophes, and species extinctions, reveals the limits of an individualistic approach.

Rather than creating traditional illusory pictorial spaces, Natacha Donzé drafts dimensionless spaces in her work, poised between our own reality and the distant images of the future or the past, hinting at a vague narrative through abstract forms of cultural tokens. In her works, Donzé decons- tructs the power structures of institutional, political and commercial systems of the present by taking up fragments of these orders and embedding them in a non-hierarchical within her own visual worlds.

Lou Jaworski‘s sculptures combine magnetic materials with neon and computer server racks, originally utilized for storing digital data. His geometrically shaped ferrite magnet works are charac- terized by the intriguing interaction of material autonomy, ephemeral abstraction and physical laws. The artist is interested in metaphysical questions that are connected with formal reduction, as well as with phenomena of human perception. In the multi-part work L.A., the cylinders mounted in sockets and on the wall appear at first glance to be industrial neon tubes, and only upon closer inspection does the materiality of the marble columns become visible.