Janet Cardiff and George Bures Miller: The Murder of Crows, 2008 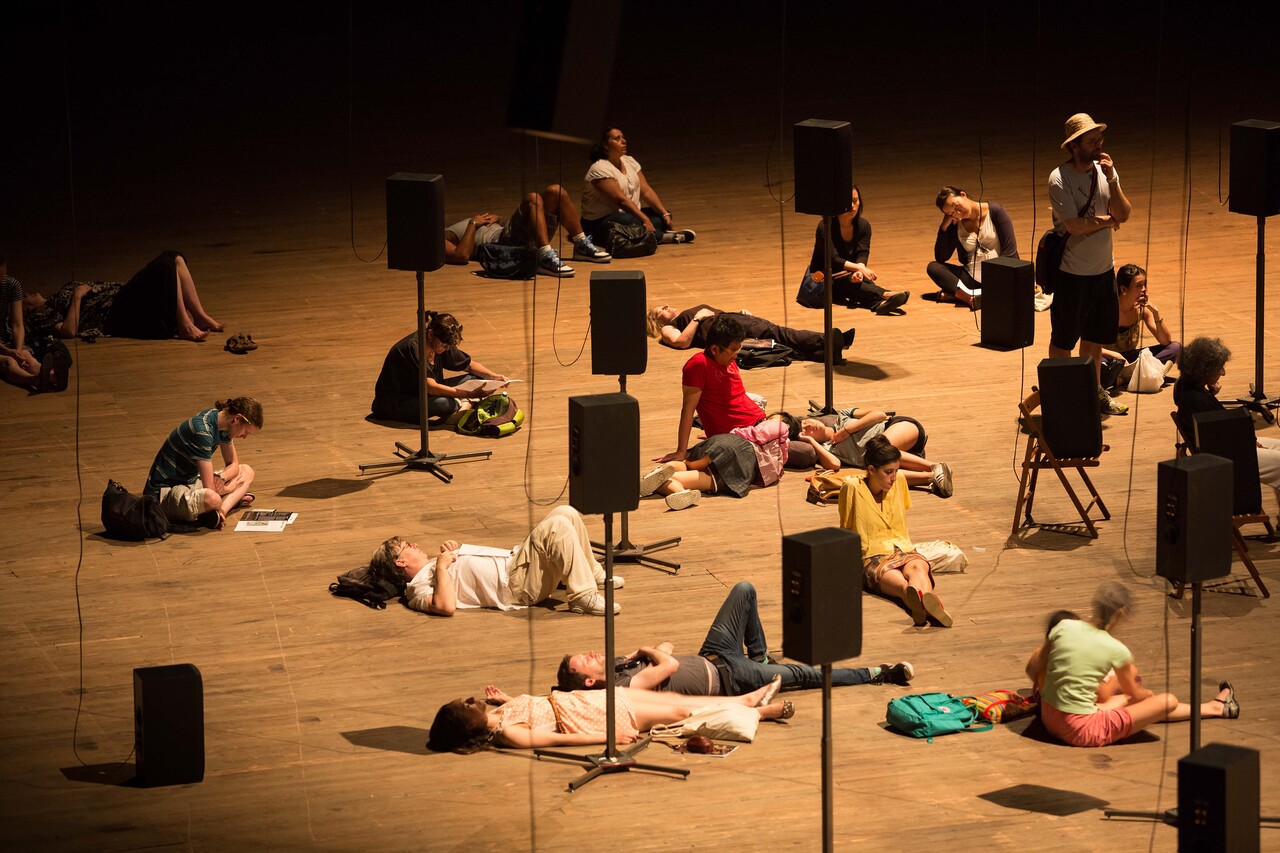 Janet Cardiff and George Bures Miller: The Murder of Crows, 2008

The Murder of Crows explores the sculptural and physical attributes of sound through 98 loudspeakers that fill the space of Matadero, emitting voices and music—a soundscape created by a special ambisonic recording and thanks to replay techniques. The installation is conceived like a film or a play in which images and narratives are created via sound. The result is a 30-minute long, three-part work that impacts the listener’s consciousness.

The Murder of Crows takes its title from the English term for a flock of crows. It draws on old folk traditions and superstitions, but also the powerful image that generates a “crow funeral”: when a crow dies, “a murder of crows did circle round” as Nick Cave’s song “The Carny” (1986) goes, mourning it. They remain quiet and still for a short time, only to then break into a chorus of shrill calls. Another reference for this piece is Francisco Goya’s etching The Sleep of Reason Produces Monsters from the series “Los Caprichos” (1799). In this suite of etchings, Goya, in the spirit of the Enlightenment, took a critical look at the tyranny, ignorance, and superstition of a socio-political class that had chosen stagnation as their only strategy. He warned: “Imagination abandoned by reason produces impossible monsters.” A call that is still current in a society defined by conflicts, wars, and catastrophes, where power is based, on many occasions, on superstition and populism.

Storytelling is at the center of this piece, a place where dreams become the main narrative structure, an ancestral source of wisdom that defies the limits of reality and calls for new readings of the current times. This unique soundscape combines voices, music, and sounds in a narrative about three dreams of conflicts, violence, and loss (and mourning) of a world in crisis, which is at the same time a haunted call for hope.

TBA21, Thyssen-Bornemisza Art Contemporary is a leading international art and advocacy foundation created in 2002 by the philanthropist and collector Francesca Thyssen-Bornemisza, representing the fourth generation of the Thyssen family’s commitment to the arts and public service. The TBA21 Foundation—based in Madrid and Vienna, with situated projects in Córdoba and Venice —stewards the TBA21 Collection and its outreach activities, which include exhibitions, public programming, and partnerships with other cultural and civic institutions. In 2011, TBA21 established TBA21–Academy, a cultural ecosystem fostering a deeper relationship to the ocean through the lens of art to inspire care and action.

Matadero Madrid Centre for Contemporary Creation is run by Madrid City Council’s Department of Culture, Tourism and Sport. Created in 2006, Matadero is located in the city’s former slaughterhouse and cattle market, a complex that is of great historical and architectural value. Its various spaces host an extensive programme of exhibitions, plays, festivals, concerts, films and audiovisual projects, conferences, conversations and workshops, artistic residencies, educational programmes and activities for families.