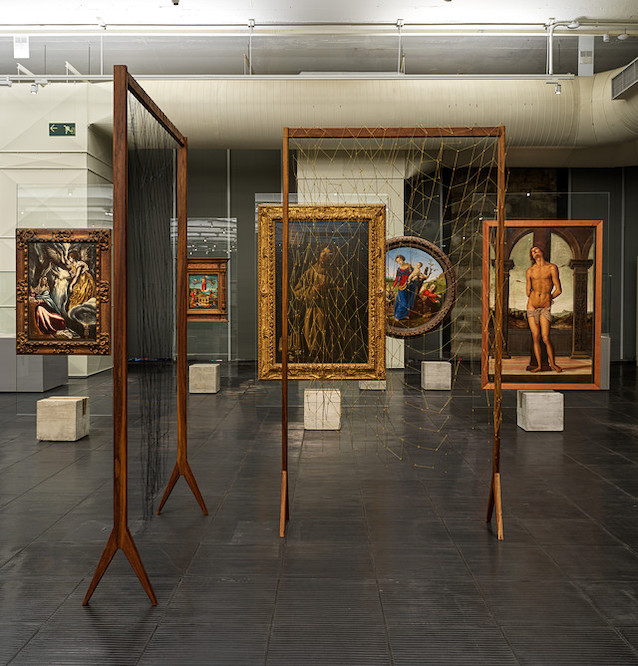 Defined by the artist herself as “sculptures created in space,” the works by Leonor Antunes (Lisbon, 1973) establish complex relationships between sculpture, architecture, design, light and the body—that of the spectator moving through the gallery or space that the artist occupies. The artist gives special attention to the materials she uses, which are often natural or organic, and to the effects left on them by time and their use, highlighting lines and weaves, techniques and textures.

One of the most striking features of Antunes practice is the interest she takes in the productions of a number 20th-century artists, architects and designers, whom she investigates and is inspired by. In this sense, she constructs a true archive of references, composed above all by pioneering women modernists who have often been left outside the grand narratives of art history, and who emerge as characters in Antunes’s work: Anni Albers, Charlotte Perriand, Clara Porset, Egle Trincanato, Eileen Grey, Eva Hesse, Franca Helg, Gego, Lina Bo Bardi, Lygia Clark and Ruth Asawa, among others.

A key figure in this archive is Bo Bardi, the architect of the MASP building, which is herself the starting point for this exhibition project, extending also to the Casa de Vidro [Glass House], the architect’s iconic residence in São Paulo’s Morumbi district. Other characters are also featured here—Porset, Clark, Gego and Franco Albini, who was an important reference for Bo Bardi herself.

The exhibition’s title is an allusion to the Italian-Brazilian’s spaces and to the attention she gave to “joints, voids, and gaps.” Besides these elements, two common threads in the show are verticality and transparence.

At MASP, villa neufer (2019) is a sculpture made on the basis of a ladder by Albini. Caipiras, capiau, pau a pique refers to elements used in the famous show of the same name on “country-folk, rustics, wattle-and-daub” organized by Bo Bardi at Sesc Pompeia in São Paulo 1980. A floor piece borrows its geometric composition from a painting by Clark (Superfície modulada, 1952), enlarged on an architectural scale, allowing the spectator to actively enter the work, thus anticipating a path that Clark would investigate in the following decade, with the viewer’s participation in her famous Bichos. For its part, the wooden latticework installed on the ceiling, inspired by a detail of Porset’s house in Mexico City, occupies two concrete niches in the gallery, blending two characters: Porset and Bo Bardi. At the museum’s collection display exhibition on the second floor, among Bo Bardi’s iconic glass easel system, Antunes created a two piece sculpture poetically and precisely titled joints, voids and gaps(2019) that establishes rich dialogs with the easels and the classical works of art around them—paintings by El Greco, Raphael, Zurbaran, Piero di Cosimo, and Perugino. The interplay of transparencies is articulated through many layers, grids and nets.

At the Casa de Vidro, Lygia (2019) consists of 9 vertical pieces inspired by Clark’s Trepantes(1960s), which hang from metal plumbs based on those of the old bookshelves of the personal library of Lina and Pietro Maria Bardi, thus combining two key characters in 20th century Brazilian art history: Lygia and Lina. Bo Bardi reappears in Discrepancies with Lina (2015), sculpture tables whose concrete tops take the form of the iconic windows of the Sesc Pompeia, an important work by the architect.

joints, voids and gaps connects different characters and makes them present in a different spaces: here, the interaction between art and architecture valorizes know-hows from different times, techniques and languages, whether they be industrial or artisanal, authorial or anonymous.

The exhibition is curated by Adriano Pedrosa, Artistic Director, and Amanda Carneiro, Assistant Curator, MASP, and is on view at the MASP through April 12 and at the Casa de Vidro—Instituto Bardi through March 14, 2020. joints, voids and gaps, the accompanying publication edited by Carneiro and Pedrosa, will be published by MASP in partnership with Mudam, The Contemporary Art Museum of Luxembourg, in January 2020. The fully illustrated 280-page monograph covers Leonor Antunes entire career and features new contributions by the curators as well as essays by Clara Kim, Grant Watson, Caoimhin Mae Giolla Léith, María Inés Rodríguez, and Briony Fer.