Marcel Dzama 'An End to the End Times' 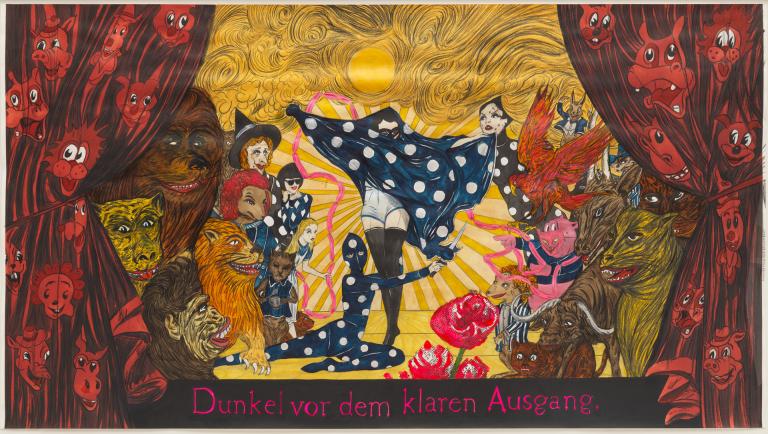 Marcel Dzama 'An End to the End Times'

Marcel Dzama creates works rooted in performativity and storytelling. The artist is widely known for paintings and drawings that exude a storybook charm, while confronting viewers with timely political realities. Mining stylistic references ranging from canonical art historical movements like European Surrealism to the vernacular of Soviet Agitprop illustrations, Dzama demonstrates his singular vision in myriad media. His fantastical figures don costumes and masks as they gallivant through stage-like settings. Humans, animals, and mythical monsters become fodder for the exploration of politics, sexuality, theatricality, and psychology, among other subjects.

An End to the End Times offers a unique opportunity to encounter the span of this prolific artist’s career and ever-expanding lexicon. Presenting works from the past 20 years, the exhibition opens with a selection of small ink and watercolor paintings inspired in part by allegorical tales including Dante’s Divine Comedy (1308–20). These early works on paper fuse the historical imagery of artists like Hieronymus Bosch (1450–1516) and William Blake (1757–1827) with pop culture references from Dzama’s youth. Featuring isolated characters on sparse backgrounds, they exemplify Dzama’s signature style that established him as a major figure in the contemporary art world and serve as precursors to increasingly complex compositions featuring multitudes of human and hybrid figures.

The exhibition is anchored by On the banks of the Red River, a massive diorama that contrasts the intimacy of Dzama’s early paintings and was conceived, along with other sculptural works, in Guadalajara, Mexico, during a 2006 residency at Ceramica Suro, where the scale and ambition of the artist’s work expanded significantly. Based on Dzama’s 2005 painting You gotta make room for the new ones, the diorama — which features a battalion of huntsmen firing their rifles into a sky populated by hordes of bats, birds, and severed floating heads — is a striking presentation of the artist’s whimsical albeit dark aesthetic.

Dzama’s most recent work is represented by prints and small paintings from 2020, as well as a grand-scale triptych created specifically for the exhibition. Though not an explicit narrative, the scene typifies the energetic ensembles and environs of Dzama’s large-scale works. While the artist has explored sinister subjects throughout his career, his recent small paintings fixate on the respite of travel and indulgence of nostalgia, contrasting the frustration of current travel restrictions imposed around the world with lush images, inspired by visits to Morocco and Mexico, that give viewers a sense of hope for leisure in a post-pandemic world.

Marcel Dzama (b. 1974, Winnipeg, Canada) has exhibited internationally in solo and group presentations, including the 2014 U.S. debut of his film Une danse des bouffons (A Jester’s Dance), as well as Ya es hora at Galería Helga de Alvear, Drawing on a Revolution at La Casa Encendida in Madrid, a major survey of the artist’s work at the Musée d’art contemporain de Montréal, and exhibitions at Le Magasin – Centre National d’Art Contemporain de Grenoble, France, Kunstverein Braunschweig, Germany, and Museo de Arte de Zapopan (MAZ), Zapopan, Mexico, among others. In 2016, Dzama designed the costumes and set for New York City Ballet’s The Most Incredible Thing, a performance based on a Hans Christian Andersen fairy tale, and completed an installation titled The tension around which history is built in the Promenade of the David H. Koch Theater as part of the NYCB Art Series. In 2013, Abrams published the first comprehensive monograph of the artist’s work, Marcel Dzama: Sower of Discord. Produced and designed in collaboration with Dzama, the monograph features contributions by Bradley Bailey, Dave Eggers, Spike Jonze, and Raymond Pettibon. Dzama lives and works in Brooklyn, New York. He has been represented by David Zwirner since 1998.