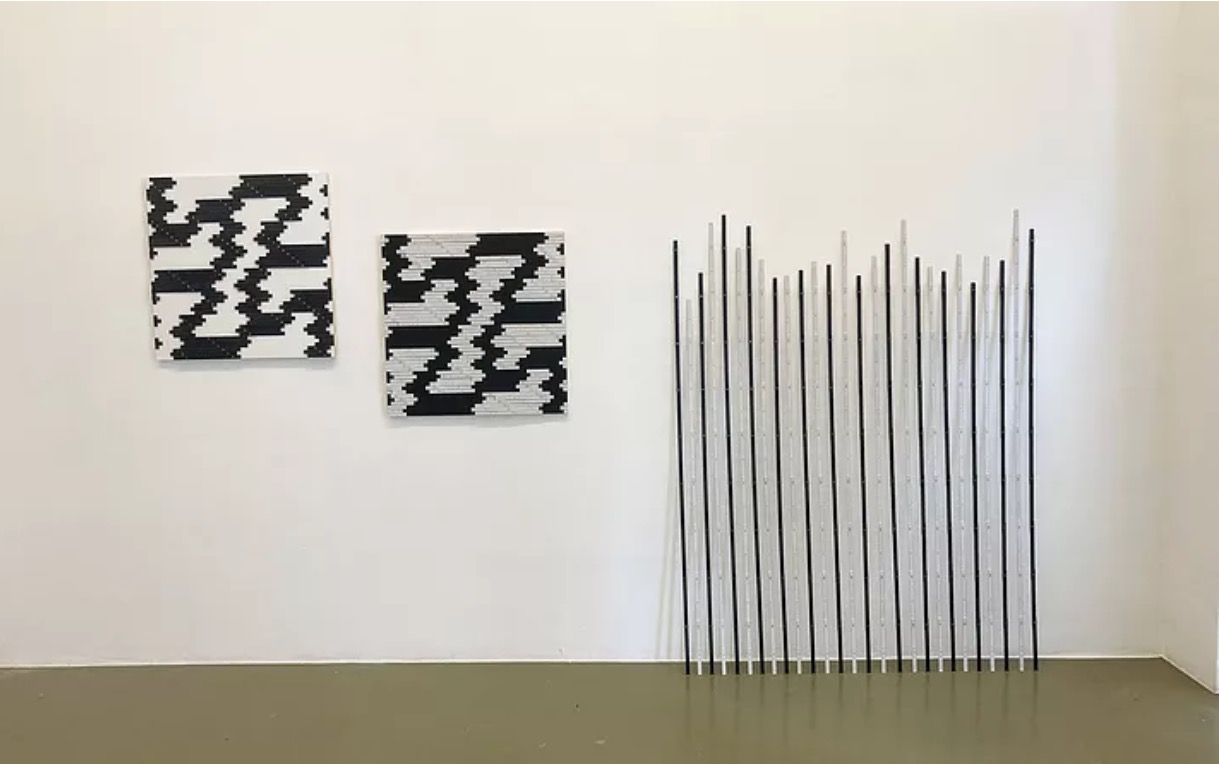 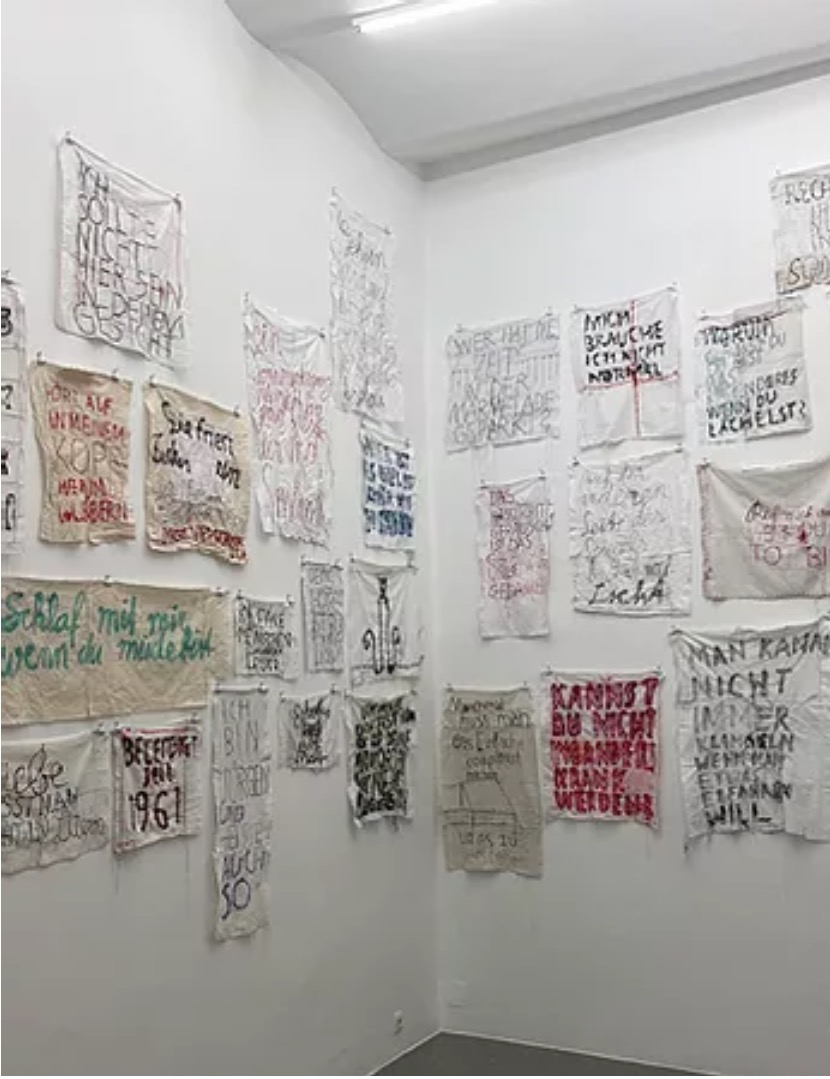 We are very pleased to present the first solo exhibition of artist Milen Till in our Vienna gallery space. Under the title Vermessen, Till sets out on a completely subjective classification of artistic icons with the help of objective equipment and methodology. He takes measurements of famous works, big names, influential role models, and important artists.

For Till, art history is one big treasure trove. Unabashedly and without shyness, he falls back on fixed pieces of past epochs and reinterprets them in a playful way. He confidently enters into a dialogue with his idols and questions the cult of genius of the 20th century.

For his exhibition Vermessen, he uses an unusual tool. Inspired by the Munich folk comedian Karl Valentin, Till “measures” art history with a folding ruler. While Valentin, the Dadaist language artist and trained carpenter, used the collapsible measuring sticks as props for his sketches, in Till’s art they become a versatile design tool.

The folding rulers are printed, painted, shortened, collaged or freely arranged in space. Tailored to the height of artist friends and role models, they are transformed into personalized representatives that populate the exhibition spaces. Thus, in addition to Karl Valentin himself, Kazimir Malevich and Sigmar Polke are also present.

In addition to these people, Till devotes himself to works: he measures the art of the 20th century—from Piet Mondrian to Josef Albers to Agnes Martin or Barnett Newman. He applies different colored folding rulers to wooden panels and encounters the geometric structures of abstract painting with Dadaist humor. The folding ruler homages always bear Till’s own artistic signature. Shapes are sometimes distorted, colors adapted and ambiguous, comments integrated.

With his playful reinterpretations, Till takes aim at the art scene of the last century, which was dominated by the cult of genius and exuberant masculinity. With wit and charm he shakes the throne of the painter princes. He questions the powerful gesture of large formats, the unbroken significance of great names and the special recognizability of their works. Through the use of folding rulers, the exaggerated works of art become a manifesto against the sacralization of painting and for an approach of art to life. The unconstrained appropriation of existing styles and forms of expression is directed—consciously or unconsciously—against the exaggerated importance of authorship and the cult of personality in art.

This also includes the repeatedly established reference to his long-time teacher and mentor Gregor Hildebrandt. As a “master student,” Till not only follows in the footsteps of the former carpenter Karl Valentin, but also in those of his teacher. In a productive and stubborn way, he makes use of his love of detail, his creative use of unusual design tools, and his minimalist aesthetic. For example, he provides a photograph showing Karl Valentin surveying the Krone circus with a real folding ruler. For another work, he arranges the folding yardsticks in a display case. Arranged correctly, they produce another famous image of a folding ruler, Sigmar Polke’s Folding Ruler Palm Tree.

In Milen Till’s art, there are no limits to the play with models, inspirations, and cross-references. His unpretentious approach attempts to take a new look at the art of past eras and proposes a humorous alternative to the existing cult of genius.

Milen Till was born in Munich in 1984. After an initial grounding in the graffiti scene, he founded the DJ duo Kill the Tills together with his brother Amédée, which was a fixture in the techno and club scene. Since 2016, he has been studying with Gregor Hildebrandt at the Academy of Fine Arts in Munich. His work has been shown in numerous solo and group exhibitions, including Galerie Ruttkowski, Cologne; Galerie Klüser, Munich; Baumwollspinnerei Leipzig; Kunstverein Heppenheim; Galerie Suzanne Tarasieve, Paris; Salon Hansa at König Galerie, Berlin; and the Romanian Cultural Institutes in Berlin and Paris.

We cordially invite you to the opening of the solo exhibition Tarnsätze und Stickstoffe, of the German-Austrian author, cartoonist, and artist Tex Rubinowitz in our Vienna gallery. In the works on display he combines his writing, drawing, and artistic talents with a previously hidden talent: sewing.

The source material for Rubinowitz’s new series of works is discarded textiles. He neatly sews together old tablecloths, handkerchiefs or wall covers, and then embroiders them with sentences, sayings or scraps of words. He uses an antiquarian Pfaff sewing machine for this, which, as he says, guides and drives him almost by itself.

He, the artist, simply surrenders to the act of machine sewing, almost falling into a trance and somehow letting the embroidery happen. The whirring, thumping Pfaff sewing machine takes command and provides the artist, threatened by possible doubts, with the liberating feeling he longs for deep down inside: the loss of control with simultaneous maximum productivity.

Chance had decided which word he picked up and which sentence got stuck in his head; it is now left to chance which letter he first punches in, which concept is formed from it, how thick the contours of the writing become, how one word joins the other, and where everything leads. Neither the complete sentences, nor the final executions are calculated.

“Letting the subconscious complete sentences, and letting a sewing machine embroider them on its own makes visible what we can’t control as part of who we are, and what we are made of,” Rubinowitz notes.

Thus, the embroidered textile pieces fit perfectly into Rubinowitz’s oeuvre, which so skillfully oscillates between senseless meaningfulness and meaningful senselessness. Thus, the viewer stands amused or amazed before a flood of sayings, fascinated by the aesthetics of the embroidered, dancing letters, teasing out the words and their possible meaning, sometimes picking up the thread of a possible interpretation, sometimes losing it again—only to perhaps realize that the sewing thread has more sense than oneself, and that true meaning is only in what you feel deep inside and what rhymes together.

Tex Rubinowitz was born in Hannover in 1961 and has lived in Vienna since 1984. As a cartoonist, he works for the Falter, the Frankfurter Allgemeine Sonntagszeitung, Titanic, and Der Kurier. As a writer, he has published numerous books and was awarded the Ingeborg Bachmann Prize in 2014. As a visual artist, he has only appeared periodically so far, despite brief study with Oswald Oberhuber at the Universität für Angewandte Kunst (University of Applied Arts). But thanks to his new liaison with a Pfaff sewing machine, he feels a desire for more.