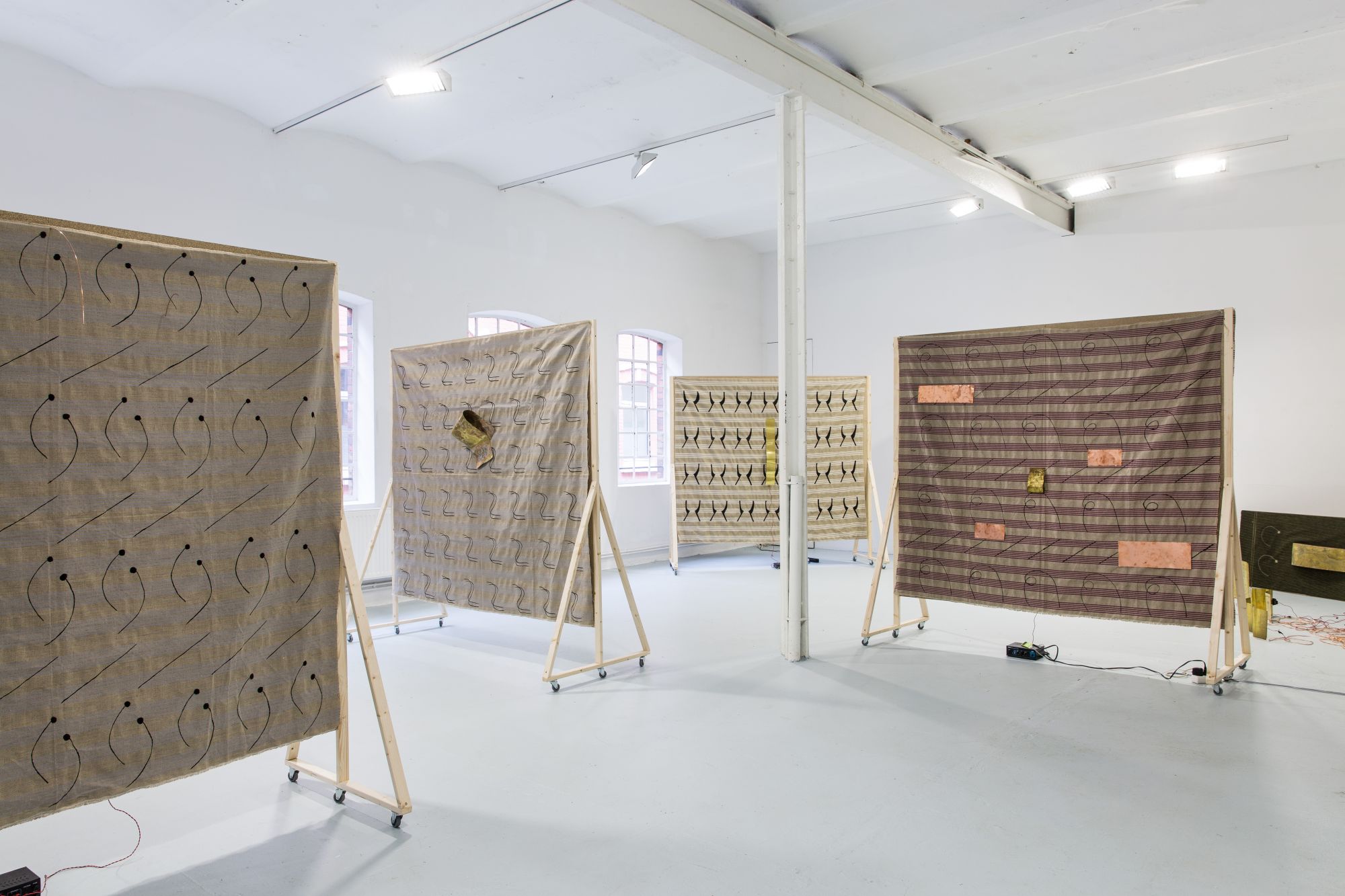 A series of fictional notation patterns painted on linen score pages. Each invented notation takes existing musical language and skews it, often in such a way as to fuse it with living forms or body parts. Simultaneously, many of the score-paintings become instrument-speakers which must be activated in particular ways, with specific body relationships between listener\viewer and painting\instrument.

The paintings are in various states of activeness. There is a range of communicative modes. Each painting either suggests or demands communication. A baton curved into swimming notes morphing into a copper wire reaching out to the viewer. A beat frequency creature covered by a copper band-aid serving as an on\off button. These are just some of the ways the paintings beckon to the viewer.

The paintings are mounted on moveable chalkboard structures. These chalkboard displays form an architecture in the room through which the viewer must navigate and learn how to absorb. Within this architecture, a brass ensemble consisting of scrap brass forms a musical theater framed by the swarming notations. A composition composed for this 8-piece ensemble will perform at particular times throughout the day.

After a joint tour of Sergei Tcherepnin’s exhibition, during which he will “actualize” several of his sound sculptures, Fiona McGovern and Axel Wieder will talk with him about the underlying musical and theoretical concepts, as well as the potentials and problems involved in working with sound in an exhibition context. A special role is played by Tcherepnin’s idea of “Queer Sounds” and “Queer Listening”, as well as his collaboration with the composer Maryanne Amacher who died in 2009.

The conversation takes place in the frame of Sergei Tcherepnin's show "Body Bound Notations" and will be held in English. It is a cooperation with the Kunstraum Leuphana Universitaet Lueneburg.

Sergei Tcherepnin is a composer, musician and artist, and currently lives and works in New York. His performances and exhibitions include The MIT List Visual Arts Center, Cambridge, The Museum of Modern Art, New York, Pavilion of Georgia at the 55th Venice Biennale, Murray Guy, New York, The Kitchen, New York, Karma International, Zurich, the Guggenheim Museum, New York, and the 30th São Paulo Biennial, Brazil. He participated in the 2014 Whitney Biennial and is a recipient of 2014 Villa Romana Fellowship in Florence.

Fiona McGovern is a research associate at the Collaborative Research Center 626 "Aesthetic Experience in the Sign of the Dissolution of the Arts" at the Free University of Berlin and until the end of November this year Visiting Scholar at Columbia University New York, for her post-doc project on interfaces and border crossings to prepare for art and music since the 1960s. Her dissertation entitled "To show the art. Artistic exhibition displays by Joseph Beuys, Martin Kippenberger, Mike Kelley and Manfred Pernice" will be published by transcript next year. In addition, she works as a freelance author and regularly publishes in various catalogs and art magazines, including texts on art, frieze d / e and Springerin. Together with Magnus Schäfer, in 2012 she organized the studio series musik in the Projektraum Studio in Berlin.

Axel Wieder is curator and author as well as founding member of the thematic bookstore Pro qm in Berlin. After holding executive positions at the Kuünstlerhaus Stuttgart (2007-2010) and the Arnolfini Center for Contemporary Arts in Bristol (2012-2014), he took over the management of Index-the Swedish Contemporay Art Foundation in Stockholm in 2014. In 2012, he also organized an exhibition on the work of composer and artist Maryanne Amacher at the Berlin daadgalerie, including concerts and screenings at Hamburger Bahnhof and elsewhere in Berlin. In addition to his international lectures on the history and theory of exhibitions, architecture, social space and political representation, he has published numerous books and regularly publishes in exhibition catalogs, anthologies and periodicals such as Spike, Frieze, Mousse and texts on art.

The exhibition is generously supported by the state of Lower Saxony, the Lüneburgische Landschaftsverband, the Hanseatic city of Lüneburg and the Sparkassenstiftung Lünburg.