The Narrow Gate of the Here-and-Now, IMMA: 30 Years of the Global 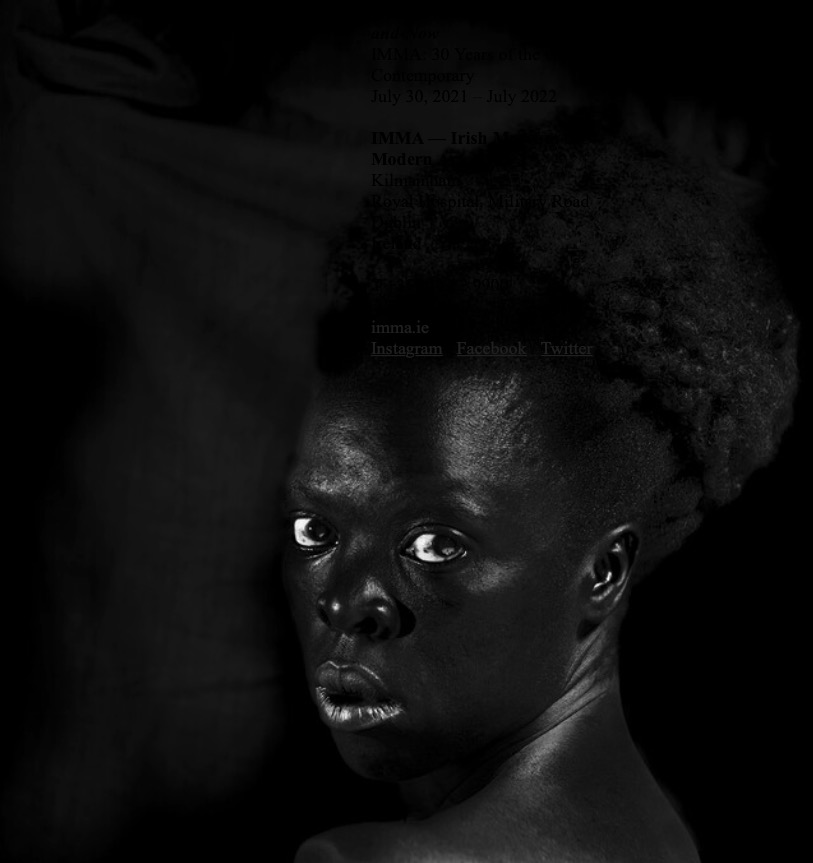 IMMA presents the first chapter of The Narrow Gate of the Here-and-Now, IMMA: 30 Years of the Global Contemporary, a new Museum-wide exhibition showcasing the IMMA Collection to celebrate 30 years of IMMA.

Opening in four phases throughout 2021, with each new chapter exploring the past three decades through different thematic approaches. Chapter One: Queer Embodiment opens on July 30; Chapter Two: The Anthropocene on September 24; Chapter Three: Social Fabric on November 5; and Chapter Four: Protest and Conflict on November 19.

The exhibition positions IMMA’s inception in 1991 as part of a crucial moment in the history of globalisation, within the European context. Around this time, several museums of contemporary art in countries such as Poland and Lithuania were redefining their cultural identities in the context of a post-Communist Europe. These and wider shifts towards globalisation, with the dawn of the internet and rise of neoliberal politics in the West, provide the context for thinking about IMMA’s role in relation to the global contemporary.

The Narrow Gate of the Here-and-Now traces urgent themes across the 30-year period as they impact the personal, the political and the planetary, and prompts thinking about the effects of globalisation today in the Irish context as we respond to global crises from COVID-19 to climate change and the Black Lives Matter movement. The exhibition will explore ideas of bodily autonomy, conflict and protest, the Anthropocene era, and digital technologies, through the rich holdings of the IMMA Collection and Archive which represent a diverse history of artistic responses to these themes.

The first Chapter, Queer Embodiment, maps the context for the project, reflecting on the dramatic legislative changes that occurred in Irish society such as the decriminalisation of homosexuality (1993), provision of divorce (1996), marriage equality (2015) and the repeal of the Eighth Amendment (2018). These moments in the struggle for human rights find echoes across the globe, as grassroots movements continue to contest the impact of the State on the Body. The Museum’s Collection and Archive reflects a strong history of feminist practice, relaying the defiance of women in Ireland against church and state oppression; queer histories that capture moments of resistance and joy, as well as presenting the devastating effects of HIV/AIDS. While many of these changes have built a more compassionate society, some of the artists in this exhibition engage with troubling issues, such as Irish citizenship and migration, which remain unresolved.

Chapter Two: The Anthropocene considers the present geological era in which human activity has become visible as a dominant and destructive influence on Earth. Expanding the focus on rising sea levels, heat waves and species extinction, the exhibition looks at the temporalities and underlying structures of the Anthropocene. Chapter Three: Social Fabricshows how artists have used textiles, as a space of resistance and activism. Included are works which address how textile materiality has been used as a vehicle for interactivity, a collective voice, peripheral communities and agency. The final chapter, Chapter Four: Protest and Conflict, celebrates how artists have utilised protest as a dynamic act of resistance and assertion; subverting power while surrounded by turmoil and conflict; documenting shifting narratives linked to the creation of the world wide web and the digital dissemination of information and disinformation. It contains multiple artistic perspectives on the conflict in Northern Ireland as well as narratives of political unrest further afield.