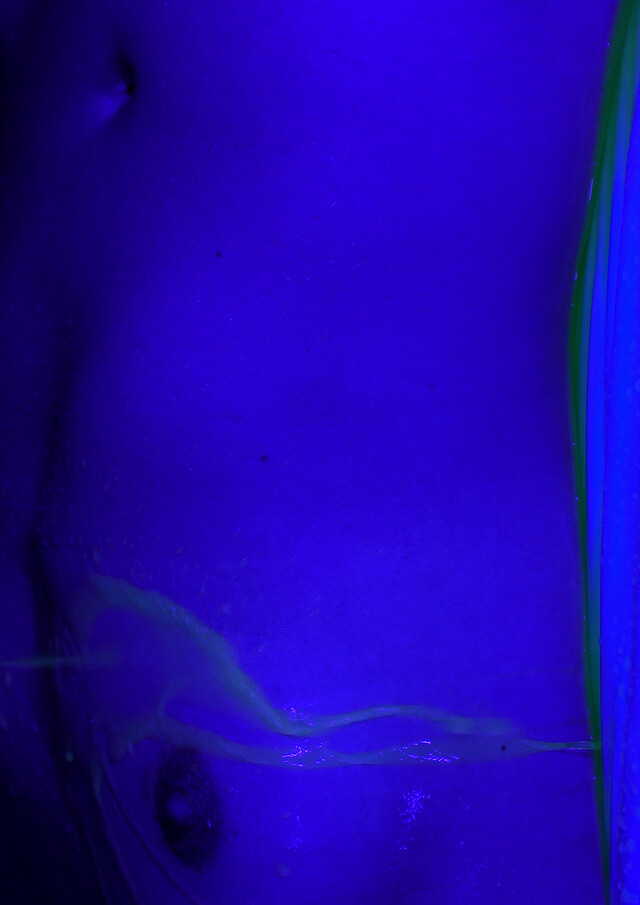 Infrared lies just before red as humans see it,
its waves just a bit too long to be visually perceived,
measurable but invisible.
It makes atoms and molecules move, creating heat…
It is constantly felt but never seen.

When watching the night sky one is observing a past,
one is witnessing memories of stars.

What I’m talking about is rather different.
It is a violent celestial event that is moving away.
As it moves away its light waves stretch
and its visible light shifts into infrared,
leaving no visible trace.

It is present but nameless,
vaguely felt yet inaccessible.

If only an observed phenomenon is a real phenomenon,
what becomes of an event once experienced
but later erased?

Kunstverein für die Rheinlande und Westfalen, Düsseldorf is pleased to present FEELINGS THAT MOVE NOWHERE, the first institutional solo exhibition by Vika Kirchenbauer. In her videos, video installations, performances, and films, she negotiates regimes of gaze, power, and visibility as well as the norms and patterns of representation inscribed in them based on her own biography. The exhibition shows selected works of the last ten years along with three new productions. In her new video work THE CAPACITY FOR ADEQUATE ANGER (2021) Kirchenbauer develops a personal and self-reflexive form of artistic critique that considers contemporary art, in its forms of production and presentation, from a perspective of class. Alongside questions around the intersection of negative affect and political agency, the work problematizes notions of upward mobility that the field of contemporary art simultaneously produces and presupposes. In this work, two strands of Kirchenbauer’s video practice converge: the personal and autobiographical investigation of societal power relations, and the preoccupation with established routines of looking at and experiencing the physical or visual presence of marginalized bodies in the exhibition space. Finally, the spatial installations PLAYING FIELD (2021) and SPECTRAL SENSITIVITY (2021) provide the setting for the presented selection of works, thus transferring Kirchenbauer‘s examination of gaze regimes from the pictorial space into the exhibition space of the Kunstverein.

Vika Kirchenbauer is an artist, filmmaker, writer, and music producer. Her work has received wide-ranging international attention. Her films and installations have, for instance, been exhibited in group shows and screenings at, among others, the Tainan Art Museum, Taiwan (2021); the Whitechapel Gallery, London (2020); Kunsthal Charlottenborg, Copenhagen (2019); the Berlin International Film Festival (2020), the New York Film Festival (2020), the ICA Artists’ Film Biennial, London (2016), and the Videonale at the Kunstmuseum Bonn (2013, ‘15, ‘17). Most recently, Vika Kirchenbauer received the EMAF Award, the German Short Film Award, and the German Film Critics Award for her work UNTITLED SEQUENCE OF GAPS (2020). In 2016, her video work SHE WHOSE BLOOD IS CLOTTING IN MY UNDERWEAR was awarded the Best Contribution to the German Competition at the International Short Film Festival Oberhausen. Other awards include the Kunstfonds Stipend (2020), the Villa Aurora Los Angeles Fellowship (2018), and the Visual Arts Working Stipend of the Berlin Senate (2015).