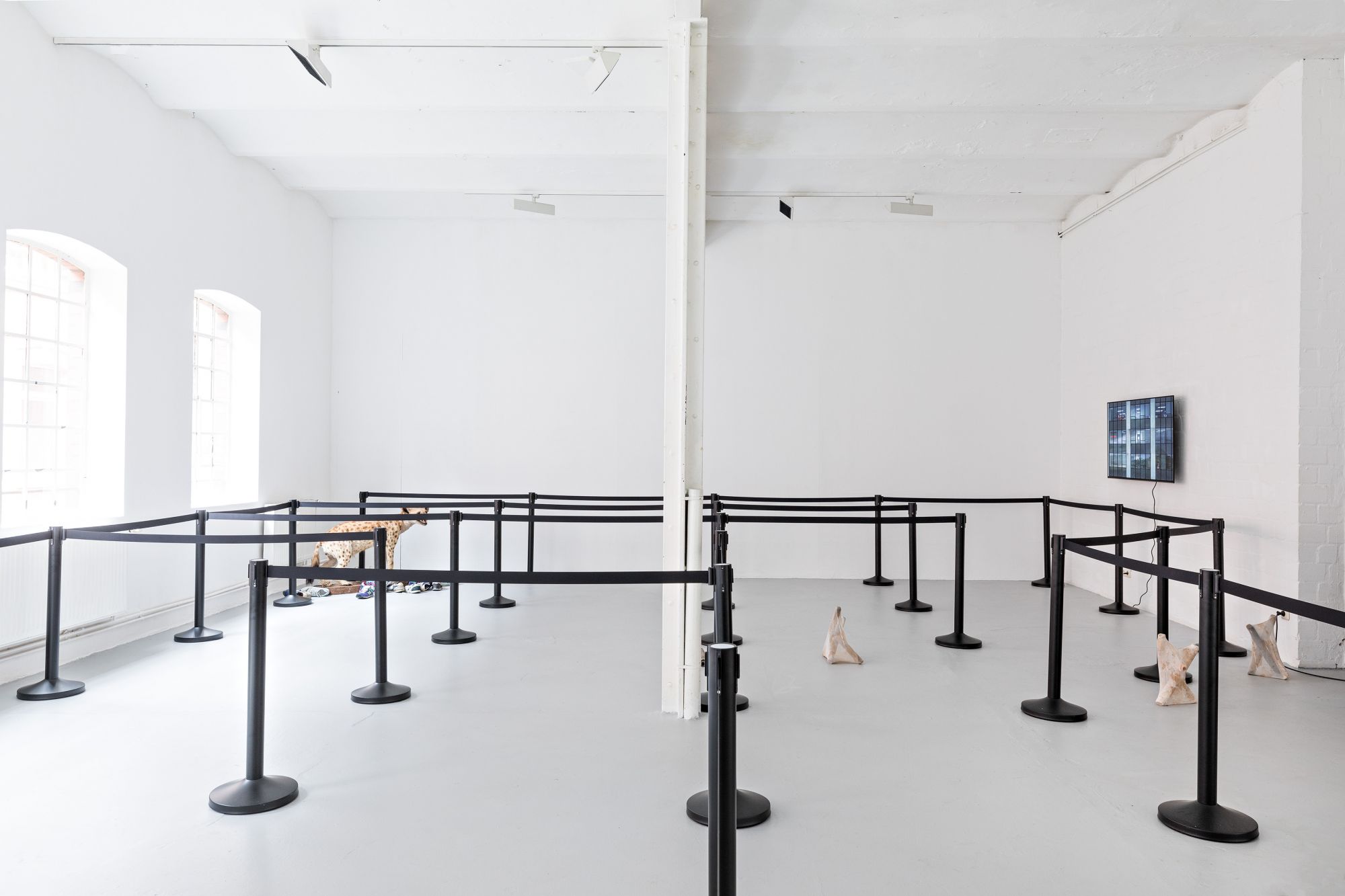 8 pm: Film screening of Bernadette Corporation, „Get Rid of Yourself“, 2003

The exhibition “Vom Handeln” is a conceptual continuation of the three-part group show presented at Halle für Kunst in 2016 and 2017 dedicated to “fantasy,” “expression” and “authenticity.” The show resulted from the attempt to formulate concepts for those moments that interest one in works of art, meaning to positively designate aspects that are met by interest and response, and not only to use a negation to formulate the fact that that quite a bit of contemporary art exhausts itself to a high degree in running through references, in evoking a critical impetus, in a vocabulary schooled in discourse, or in glossy superficiality. Surprisingly, this attempt has brought notions to the fore that are mainly regarded as obsolete and reactionary (Fantasy, Expression, Authenticity). Which seemed interesting, though, because it immediately prompted the question of whether these concepts could be applied to contemporary art in a way going beyond their clichéd, essentializing/substantializing meanings. And if so, how? With the awareness of the great extent to which these concepts are charged and questionable, the exhibition series sought to find out how far and in which direction they might lead us.

While emptied critical and political art practices have been rightly criticized ever more vehemently in recent years, discernible in the growing interest of contemporary artists in ambiguity, the fantastical, surreal, poetic, magical, and abject—in a desire, then, to no longer seamlessly tie art practices to discourses, references or politics—the situation now seems to appear much more complicated. Evoking moments of “fantasy”, “expression” and “authenticity” may no longer be under the general suspicion of contributing to a hopelessly outdated concept of art, but one should watch out that in the wake of the critique of the “political as style” (James Meyer) or of a mainstreaming of critique (Helmut Draxler), a “new sensitivity,” “intensity as style,” so to speak, does not start to creep in, which, by rejecting a platitudinous anti-aestheticism, aims at reactivating a notion of the autonomy of art limited to the formal.

Even if this danger – as a shadow of this new sensitivity or inwardness or urgency of contemporary art practices already looming on the horizon, so to say – has been has been kept in mind and formulated in the frame of the three-part exhibition series, these considerations are now to be given more room and the focus is to be placed on the motif of “action” with the current show. “Action,” understood not as a practice, but in the sense of Hannah Arendt’s thoughts on the “vita activa”—active life—that occurs in relation to the world, by means being interested in, e.g. caring for the world. However, this should be distinguished from the (renewed) vociferous call for the political in art that is being made in response to the current global political and social situation. Because what creeps in again is an appropriation or exploitation of art – namely, being responsible for making a (political) contribution – that it neither can nor must do justice to. For the notion that art’s mission lies in being “political” is not only highly idealistic; art cannot be activist or politically radical at all, since it would then be politics and no longer art. If art wanted to be political, it would have to simplify things to such a degree that it would forfeit the entire complexity of aesthetic experience. It would then be pedagogical or amount to agitprop. Such an equation would also pose a great threat, because, as of Christoph Gurk points out, addressing or simulating the political risks making art an agent of massive de-politicization and a “pressure relief valve that enables the system to operate all the more effectively.” For engaged art practices are usually not bound to a concrete political subject or situation, but merely culminate in a “romantic notion (...) of permanent revolution.” (Helmut Draxler). Revolution at all times and nowhere, so to speak.

One should not fall back behind these considerations on the relationship of art, politics and engagement. Nevertheless, the exhibition by no means grasps itself as dedicated to art and politics. It is not intent on conveying a picture of what “good” or “contemporary” “politically committed” art could look like; just as it is not interested in classifying art as such or attributing categories to it. Instead – like the entire exhibition series – it is also based on considerations pertaining to art practices in general and on the attempt to understand the moments that make artworks interesting. If the focus is on the ambivalence between aesthetics and commitment, which needs to be explored, on the vacillation between these two poles, which in the best case cannot be arrested, then this also indicates why the moment of “action” can be understood as a conceptual continuation of the thoughts on “fantasy,” “expression” and “authenticity”; and also why the exhibition itself features artistic positions that maneuver between the poles of aesthetics/poetics and commitment and therefore, as Hannah Arendt would say, struggle to set themselves in relation to the world.