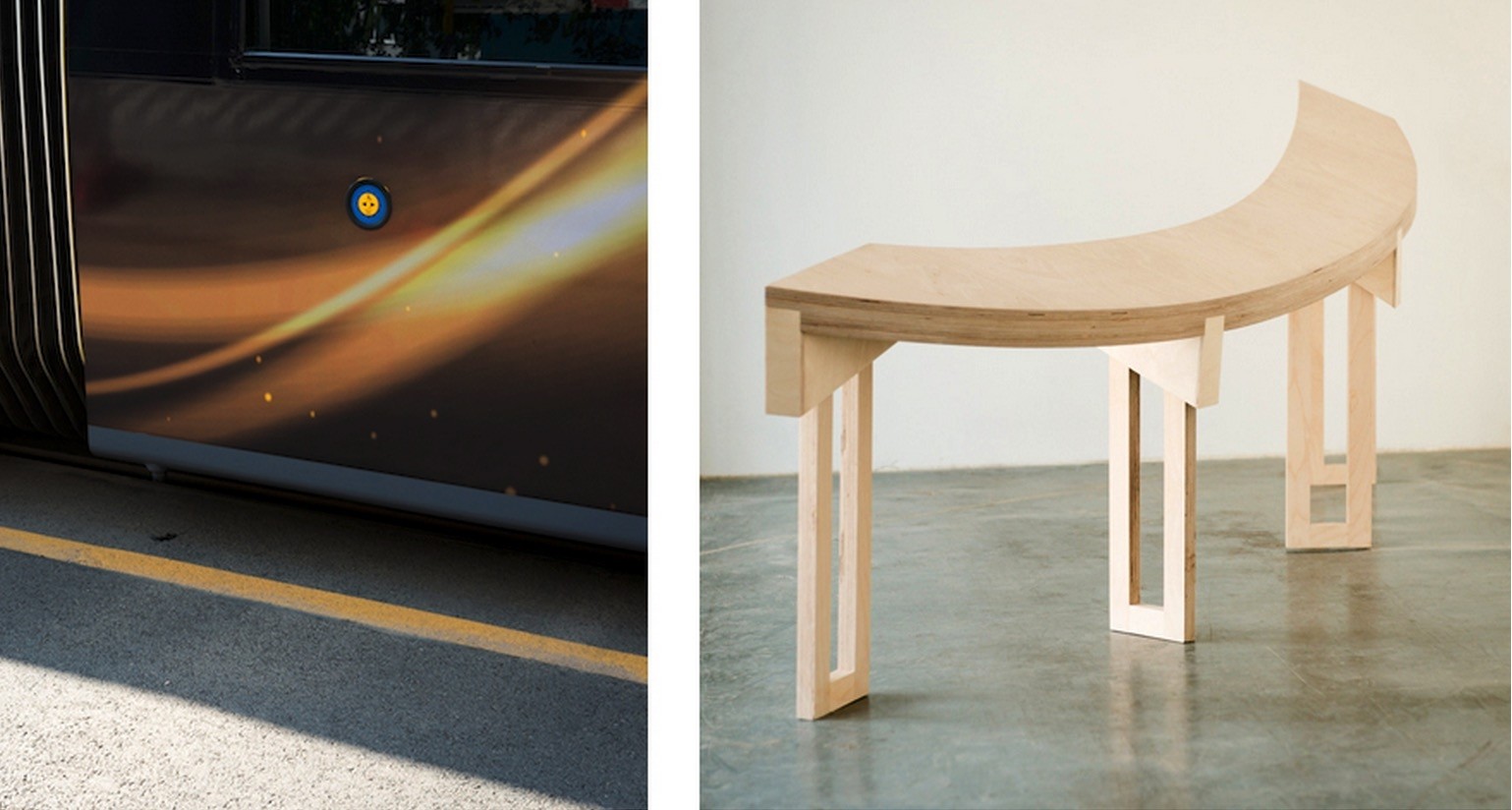 cubus-m is pleased to present Lost in Space, the first collaborative exhibition by Wiebke Loeper and Susanne Lonrenz.
With different initial concerns and using different media, two artists travel through pictorial space and real space. Loeper’s photographs and Lorenz’s sculptures are about the dissolution and reintegration of space. Histories are either carried over or produced here for the first time. Relations are established, relinquished and formed anew.

Susanne Lorenz‘s pieces Bank, Turm and Vordach from the series Perspektivobjekte (2013 onward) are simple wooden objects, the surfaces of which exhibit curiously distorted perspectives. The origins of these sculptures are to be found in architecture and details of furniture from early renaissance paintings by Giotto, Duccio and unknown masters. These paintings from the 13-15th centuries do not yet display a constantly aligned mathematically constructed perspective, but their own, sometimes hierarchical, pictorial space with multiple alignments. Susanne Lorenz takes the painted motifs out of their pictorial space with its heterogeneous perspectives and realises them as free-standing objects or reliefs. While the perspective distortions in the works relate back to the original painted pictorial space, they are now confronted with the new surroundings of an exhibited situation and new perspectives from the observers. The sizes are chosen so that the perspective objects are neither illustrative nor functional but rather have their own self-contained oddness. In their simple, raw aspect the spatial perspective objects seem at first to deny their painterly origins, but rather the forms support a sort of attention in which their inscribed pictorial perspectives give an impression of history.
The works Karneval, Kinderspiele and Triumph from the series nach Pieter (2012 onward) are also “released” from time and history. Lorenz isolates painted details from the pictorial spaces of Pieter Breugel the Elder, placing them in space in the form of small colourful plasticine sculptures. The series Rahmungen (2013 onwards) with the works Atmen and In and Out show space in lieu of what is normally framed. The sculptural framing shapes become characterful protagonists in themselves.

Wiebke Loeper‘s photographic works are concerned with other types of traces of – lost or invisible – histories, settings and empty spaces. In her photographic series Lad (1996/97) and Mitte, Berlin (2004/05) Loeper was already examining the transformation of the German capital in historical and biographical terms. The works shown here from the series zu eigen (2014 onward) portray a city from the perspective of one who knows it, approaching cautiously, feeling the once familiar surroundings from a distance. The gaze is questioning, searching for histories, material and the tangibile. The architectural motifs seem rootless, they have no frame, no anchor but seem temporary and helpless in terms of formal language, treatment and choice of materials. Facades recall the lacquered surfaces of cars or ornamented porcelain more than they do a culturally founded architecture. The city seems to be formed from a large area of empty space – looking for its templates in displays, catalogues or seemingly innocuous historical examples. Empty urban spaces occupied by “decorated sheds”[1]

Just as Susanne Lorenz’s works have given up their former concrete pictorial space in the paintings in favour of an open existence in real space, the motifs in Loeper’s photographs do not invoke history in the sense of a spacial context. They develop their roots in the pictorial space of the photograph for the first time. The photopraph becomes the place of anchorage that the city does not provide. The motif has detached itself from the city as the space where its identity is formed. It is searching for beauty and independence yet displays the attempt to instil the city. It is like an image of our idea that cannot connect with what is to hand. Like an organ that will not grow. Pictures, whether photographic or painted, are excerpts from their own times, simultaneously buttoned-up and undone. Full of internal pictorial relationships, these suggestive visual spaces are permeable to their surroundings. No frame can contain them.
The “groundlessness” in the works of both artists also brings great potential for discrepancies, movable conjunctions and perspective provocations. The identity of subjects between temporary independence and a new forming of rootedness seems ambivalent.

Wiebke Loeper (*1972 in East Berlin), studied Photography under Arno Fischer and Joachim Brohm at the Hochschule für Grafik und Buchkunst (Academy of Visual Arts) in Leipzig, completing her MA there. She has organised the lux network of photographers with friends since 1996. Loeper has been the recipient of major funding and prizes such as the Villa-Aurora residency in Los Angeles, the project funding from the German Federal Cultural Foundation as part of the “Shrinking Cities” project and the Aenne-Biermann Prize. She was represented by J.J. Heckenhauer until 2008, publishing her first two books with them. Her work has been shown internationally at darstellung/vorstellung. Fotografie aus Deutschland, Asterismo. Artistas radicados en Berlin, at the 5th African Photography Encounters Bamako and 3rd Ars Baltica Triennial of Photographic Art. Loeper examines processes of social transformation in biographical terms. She has been the Professor for Photography at the Fachhochschule Potsdam since 2008. cubus-m have represented her since 2013.

Susanne Lorenz (*1969 in Hannover), studied Fine Art and Art and Architecture in Braunschweig and Berlin. She was a professor at the Hochschule für Bildene Künste in Hamburg between 2006 and 2010 and since 2010 is the Professor of Fine Art at the Universität der Künste in Berlin. Lorenz has been the recipient of major funding and prizes such as the project funding of the Stiftung Kunstfonds, the Casa Baldi Stipend and the DAAD Stipend. Her works are in public and private collections, temporary exhibitions as well as permanent installations in public and private spaces. Susanne Lorenz’s objects and installations feature references to architecture, landscape as well as (art) historical connections. Her sometimes large format works are usually developed by the artist for specific sites. Her Badeschiff (with AMP Arquitectos and Gil Wilk) earned an international reputation: a converted barge made for the exhibition con_con in 2004 that provides a floating swimming pool in Berlin’s Osthafen to this day. For further information: www.susanne-lorenz.de

[1] In the sense of a commercial architecture with symbolic characteristics after Venturi, Robert: Learning from Las Vegas – The Forgotten Symbolism of Architectural Form