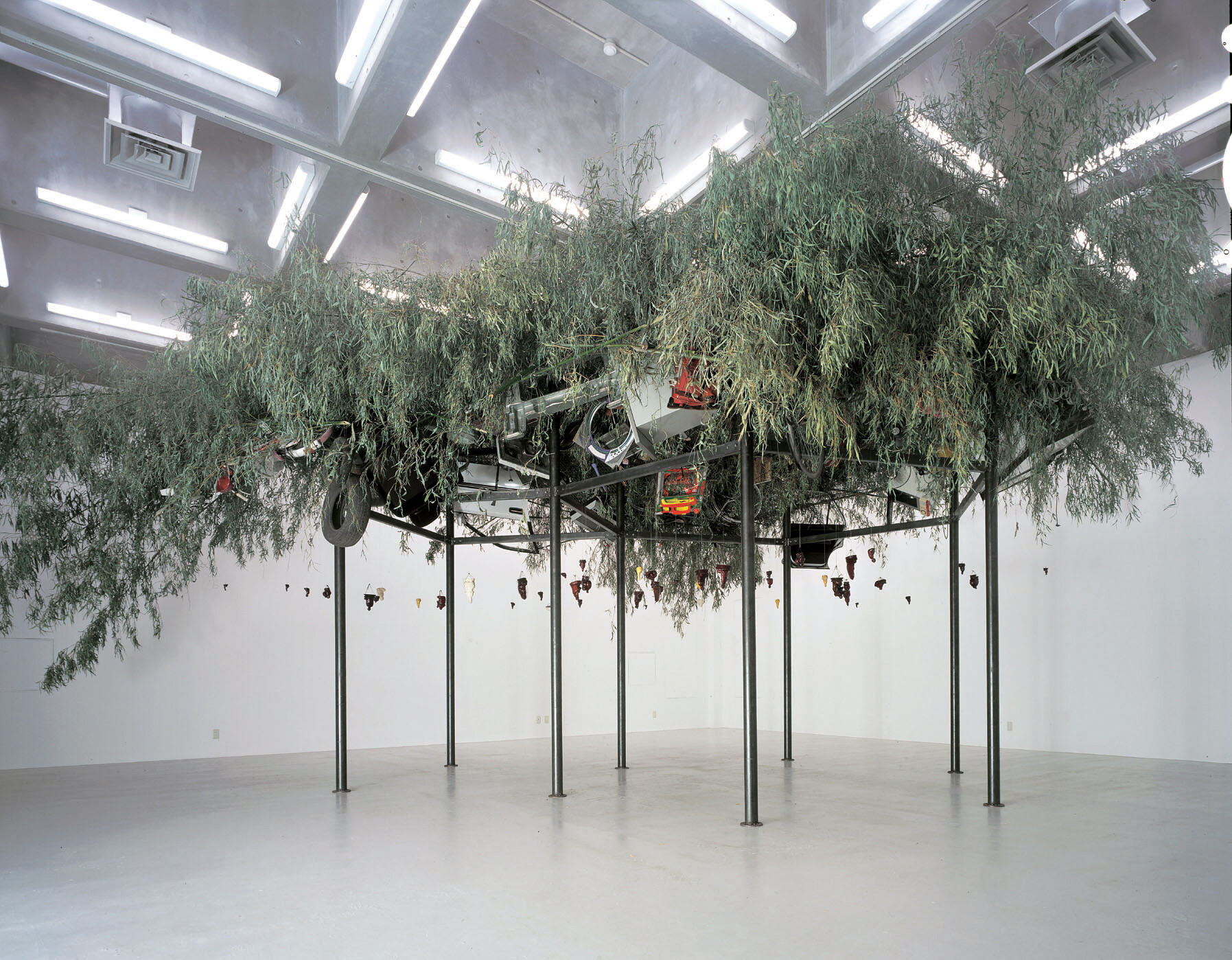 From October 15, 2020 to February 21, 2021, Pirelli HangarBicocca presents Short-circuits, a retrospective exhibition curated by Vicente Todolí devoted to Chen Zhen, one of the leading figures of contemporary art. Celebrated by the world’s most important museums, the artist managed to bridge the gap between the art of the East and that of the West, with works of great visual impact that anticipated the socio-political complexities of today, addressing themes such as globalisation and consumerism, and their relationship with tradition.

The exhibition is a journey through some of the artist’s most important works, which convey the idea of the interdependence between the material and spiritual world, through reflections on the curative and purifying action of art and on the metaphorical processes of illness and healing.

Chen Zhen (Shanghai, 1955—Paris, 2000) developed his art from the late 1970s. Born and raised in Shanghai, he lived through the Cultural Revolution in China during his adolescence and moved to Paris in 1986, where he died in 2000. While initially oriented towards painting, he gradually moved towards the creation of installations (creating his first one in 1989, after his move to Paris). In them, he brought together everyday objects such as beds, chairs, and tables, assembling them in compositions that took the items away from their original functions and into a metaphorical dimension.

Chen Zhen’s personal experiences further affected his artistic path, for at the age of 25 he was diagnosed with a form of haemolytic anaemia. This event influenced his perception of both time and space, and brought him to consider the theme of illness. This led the artist, who had been born into a family of doctors, to a new level of sensitivity with regard to the human body and the elements that compose it.

Short-circuits is conceived as an immersive exploration within the complex artistic research of Chen Zhen, bringing together for the first time some of the artist’s most significant works from 1991 to 2000, in the 5,500 square metres of the Navate and Cubo of Pirelli HangarBicocca. The title of the exhibition is inspired by the artist’s creative method, which he referred to as a “short-circuit phenomenon”, which is that of revealing the hidden meaning of a work of art when it is taken from the original setting for which it was created to a different place. This process led Chen Zhen to reflect on the concept of symbolic and cultural enrichment as a means of artistic creation. The idea behind the exhibition reflects this, creating original interactions between the works on display, while also shedding light on the numerous cross-references and connections that appear in the artist’s works.

The exhibition opens with one of Chen Zhen’s most outstanding works, Jue Chang, Dancing Body – Drumming Mind (The Last Song) (2000). This monumental installation consists of a number of chairs and beds from different parts of the world, covered in cow hides. The work is one of the few to have a performative side to it and, on certain occasions, it can be brought to life by dancers, who brush their hands across and drum on the leather surfaces.

Together with these work, the exhibition space hosts, among others, Round Table (1995), an installation created and exhibited in the context of 50th Anniversary of the United Nations in Geneva; Fu Dao / Fu Dao, Upside-down Buddha / Arrival at Good Fortune (1997), a reflection on man, nature, and consumer society; Daily Incantations (1996) and Prayer Wheel – “Money Makes the Mare Go” (Chinese Slang) (1997), two works focused on the relationship between China and its modernisation. Lastly, the exhibition includes works that investigate the concepts of illness and healing, both physical and spiritual, for example Purification Room (2000) and Jardin-Lavoir (2000). The latter, installed in the Cubo space, is composed by 11 beds, transformed into as many water basins, each one filled with everyday objects, and placed under a hydraulic system that endlessly pumps out water. For the artist, this installation is a form of “purification garden”, where one can meditate and collect one’s thoughts.

The catalogue
The exhibition is accompanied by a bilingual catalogue (English and Italian) published by Skira editore. It contains in-depth documentation of the show, critical essays about the artist’s practice by Alexandra Munroe (Senior Curator, Asian Art, and Senior Advisor, Global Arts, at the Solomon R. Guggenheim Museum, New York), Marco Scotini (Visual Arts Department Head at NABA, Milan and Artistic Director of FM Centro per l’arte contemporanea, Milan) and Vicente Todolí (Artistic Director of Pirelli HangarBicocca) as well as detailed entries on all the artworks on display at Pirelli HangarBicocca.

The Exhibition Program
The exhibition forms part of the 2019-2020 artistic program, devised by the Artistic Director Vicente Todolí together with the curatorial department: Roberta Tenconi, Curator; Lucia Aspesi, Assistant Curator; and Fiammetta Griccioli, Assistant Curator. The program will continue with “Digital Mourning”, an exhibition by Neïl Beloufa (February 11–July 18, 2021) in the Shed space.