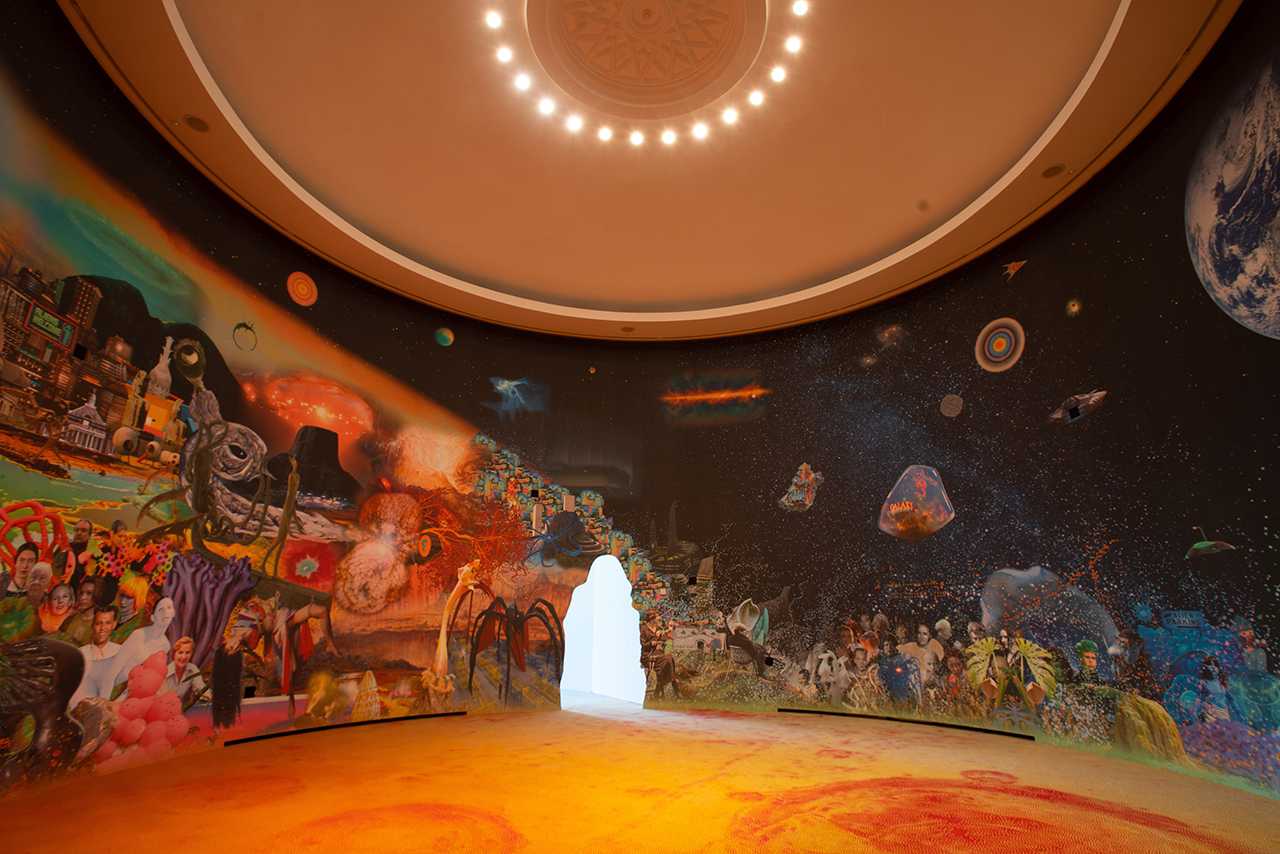 What if aliens were in love with us?

Alienarium 5 is a speculative environment that invites us to imagine possible encounters with extraterrestrials. The exhibition is a culmination of Dominique Gonzalez-Foerster’s decades-long interest in science fiction, and her continued research into deep space and alien life.

Gonzalez-Foerster is an experimental artist. Engaging with the exhibition as a medium, her spatial inventions and investigations probe the notion of display, as well as how an image or scene is experienced. Drawing on a wide range of references from music, literature, film, architecture and pop culture, the artist creates densely layered environments that transport viewers into alternative narrative, temporal and psychological dimensions.

Compelled by historically experimental modes of presentation such as the panorama, Gonzalez-Foerster creates uncanny environments that unsettle the familiar and the expected. From her ‘Chambres’, an early series of highly-stylised fictional or personal interior spaces defined by a certain colour and mood, to her ‘Apparitions’ – ongoing live and holographic conjurings of fictional and non-fictional characters – Gonzalez-Foerster shape shifts between diverse media. The artist’s distinctive form of speculative visual fiction connects feeling and thought to that which we can see, smell, hear and touch, in an exploratory process of world-building.

For Alienarium 5,Gonzalez Foerster has collaborated with Paul B. Preciado (writer and philosopher), Martial Galfione (architect), Julien Perez (musician), Barnabé Fillion (parfumier), Mélanie Gerbeaux (hair and makeup artist) and Ivan Murit (artist and designer) to transform the Serpentine into a spectacular and otherworldly vision. A multi-user VR piece contemplates new forms of connection through alien embodiment, while an immersive 360-degree collage titled Metapanorama uses outer space as a framework to bring humans, nonhumans and extraterrestrials together. With live apparitions appearing at various points during the exhibition, Alienarium 5 blurs the lines between past and present, and between what is real and imagined.

Connecting to Serpentine’s historical role as a tea house and site of rendezvous – as well as to past exhibitions by spiritualist artists Emma Kunz (1892–1963) and Hilma af Klint (1862–1944) – Alienarium 5serves as a meeting point for friends from the past, the present and a time not yet named.

Welcoming visitors into a world of expanded possibility the exhibition is, in the artist’s words, ‘a mutant place contributing to the invention of new technologies of consciousness. It is an anti-War of the Worlds vision.’

Alienarium 5 is a proposal for freedom and interspecies connection. It is an experimental place in which to discover new forms of love and to encounter possible visitors from outer space.