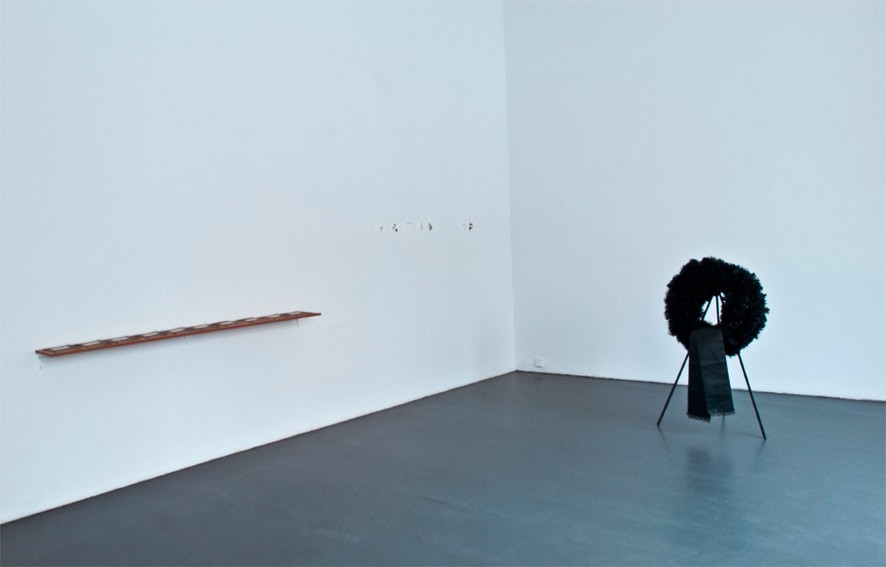 One simply must experience a feeling oneself in order to understand it. The best comparison may be to the work of a chef. The chef, too, can only add a dish to the menu once he has tasted it himself. Otherwise it does not work. Impossible, or else the dish would have no soul. The situations Felix Schneeweiß produces in the exhibition space of cubus-m, call to mind the ambience of a teenager’s bedroom or a schoolroom. Somehow the scent is reminiscent of gym class and of ink - even if no one is writing by hand or if the sport jersey has come fresh from the dry cleaners (...isn't always a bowl of cherries, 2014). The air is thick with the artist’s subjectivity, his network, his past, his personal memories and relationships. The mood is not exuberant, but just the opposite – almost everything bespeaks finality and leave-taking, and not without nostalgia. The emotions of the reading and viewing audience are orchestrated and composed, becoming erratic like those of a teenager. Happy (2013) elicits tears, as if one already understood that the most beautiful moment, the best time, had just gone by (or passed again immediately). With his purposely-placed traces, Schneeweiß makes the viewer aware of every step: thus, Schneeweiß is able to delay the fading o f an emotion, a person or an experience from consciousness for just a moment longer. Titles can become admission tickets for outsiders. Often illogical or intentionally paradoxical in their effect, through interplay with the everyday objects on display titles open interstitial spaces, which can be filled with individual feelings. Thus the works on display oscillate between recapitulation and (artistic) self-positioning. Schneeweiß places his own identity and his name in a genealogy with art icons from his personal hit and wish list of classmates in the form of ten blank composition books, lined up on a shelf, each titled simply with the first and abbreviated last name of its supposed owner (Die Klasse von eben, 2013). The companion piece Die Klasse von morgen (2013/2014), full of promise, arouses empathy, yet little hope: photographs of five - close to very close - friends of the artist who have been photographed independently of one another in a photo booth with tear-stained faces. The five images are assembled together in a single frame. Adjacent, swept up confetti left over from a missed festivity now creates an obstacle that compels reflection with every step. Small format, consecutively numbered drawings, hung as a frieze, articulate the non-verbal expression of the artist between his object findings. A wreath covered in bitumen and adorned with a dark, unpersonalized bow, becomes a commemorative symbol and, so, an unspecified token of love (This is why I love you, 2014). Elsewhere, in an edition of 100 vinyl records, each including a masked self-portrait of the artist in poster format, Schneeweiß repeats the sentence, “Please remember me, please.” The phrase is preceded and followed by a buzzing noise, synchronous with one’s expectation of rising and falling sound: the endless end of the perpetuating recording (Bitte, 2013). Finally a good-bye kiss left behind on a gallery window marks the (spatial) threshold between public and private, between personal touch and gesture, and is, as well, a commonly understood, or rather, translatable symbol that conjures absence and triggers memory for all but the unkissed (public affairs, 2014). Perhaps some of the poetry of these works is preserved in everyday life, when a swept-up pile of debris from a party, a notebook rediscovered by chance, a memento or a piece of clothing describe a longing: that things were somehow better “back then” than today and, yet, in actuality were never as good as they seem looking back. Julia Müller