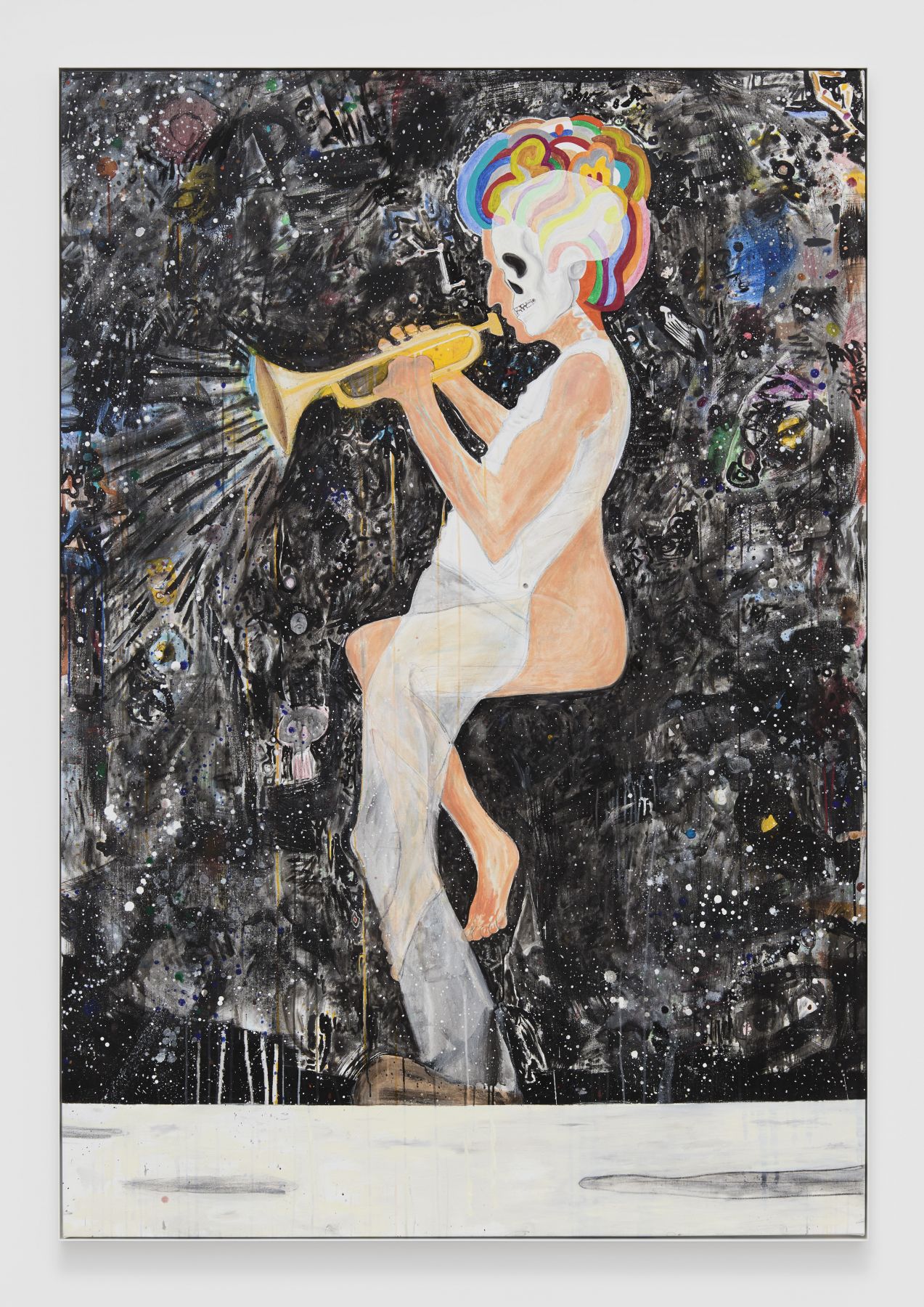 David Kordansky Gallery is pleased to present its first exhibition of paintings by Jason Fox. The show will be on view at the gallery from May 26 through July 11, 2020.

For more than 30 years, Jason Fox has been creating a personal, idiosyncratic, and risk-taking vision of painting. His work has evolved organically, with a cast of recurring characters slowly shifting over time. Fox’s earliest paintings––which appeared frequently at Feature Inc., among other galleries––moved against the grain of the appropriation-based and conceptual methodologies dominant in the 1990s. These works were filled with imaginary beings informed by his simultaneous interests in the sweep of art history and pop cultural touchstones like Marvel comic books and rock album covers. Over the last few years, however, he has begun to incorporate recognizable figures from cultural life.

Fox’s recent obsessions are all on view in this group of new works, in which hybridized portraits of people like Bob Marley, Joni Mitchell, and Barack Obama are woven together with images of the artist’s own dog or mythological beings like dragons (a relatively new addition). On occasion, he constructs even more elaborate tableaux, with full-length figures surrounded by patterns, splatters, and rough brushwork. Each of these juxtapositions is both personal and formal in nature; Fox wields a sophisticated array of compositional and painterly techniques, constructing cubist arrangements of color, plane, line, and texture whose abstraction moves them in the direction of pure visual experience.

While his subjects' respective roles in society might prompt questions about why Fox would choose to press them into such intimate relation, it quickly becomes clear that the painting process itself is his project’s engine, and that his choice of imagery is tinged with Dadaist humor. The recognizability that first captures the viewer’s attention morphs, over time, into a mysterious presence that maintains the gaze by virtue of its strangeness rather than its familiarity. Like Jasper Johns’s flags, the portraits function as armatures for experiments in the material properties of pigment and medium. Fox employs oil and acrylic paints, as well as pencil, lending the canvases a disarmingly informal aura; after extended viewing, this informality is gradually replaced with an awareness of the seriousness and commitment of his endeavor.

In several large-scale paintings of George Harrison fused with the artist’s ubiquitous dog, the full range of Fox’s imagination comes into focus. Leviathan finds the subjects placed before a mottled gold background that also contains a pair of ghostly pale silhouettes. Harrison’s face is embedded in the upturned head of the dog, who in fact appears twice, stacked within the length of "the quiet Beatle’s" slim blue body. The composition is a virtuoso study in transparency and opacity, with the hues of each of the figures informing the others; even one of the barely-there silhouettes, seemingly a mirror image of Harrison, is given a hint of clarity where it intersects with the embodied Harrison’s arm and relinquishes its brushy white for an aqueous green.

Moments like these can be found throughout the show. They attest to the richness of Fox’s paintings as objects, the intensity of his relationship to them, and the faith he places in the often solitary acts of making and viewing art. By establishing a concentrated thematic range, he paradoxically allows himself access to the breadth of human experiences, taking on memory, mortality, domesticity, fame, obsession, poetry, and violence. 66, for example, fuses at least two busts: Harrison (again) has been crossed with a death's head that appears to push out from behind his own skull. Executed in grisaille on a monochrome black background with a kind of sketchy punk elegance, it is morbid and funny, with Fox inserting it in a dialogue with a diverse group of interlocutors. The spirits of Francis Bacon, Picasso, and Cézanne all hover around it. But the painting is finally irreducible to anyone but Jason Fox, who responds to the precipitous state of the world around him by searching out the sources of his affinities and passions, and by allowing paint––and the ongoing history of painting––to tell the tale.