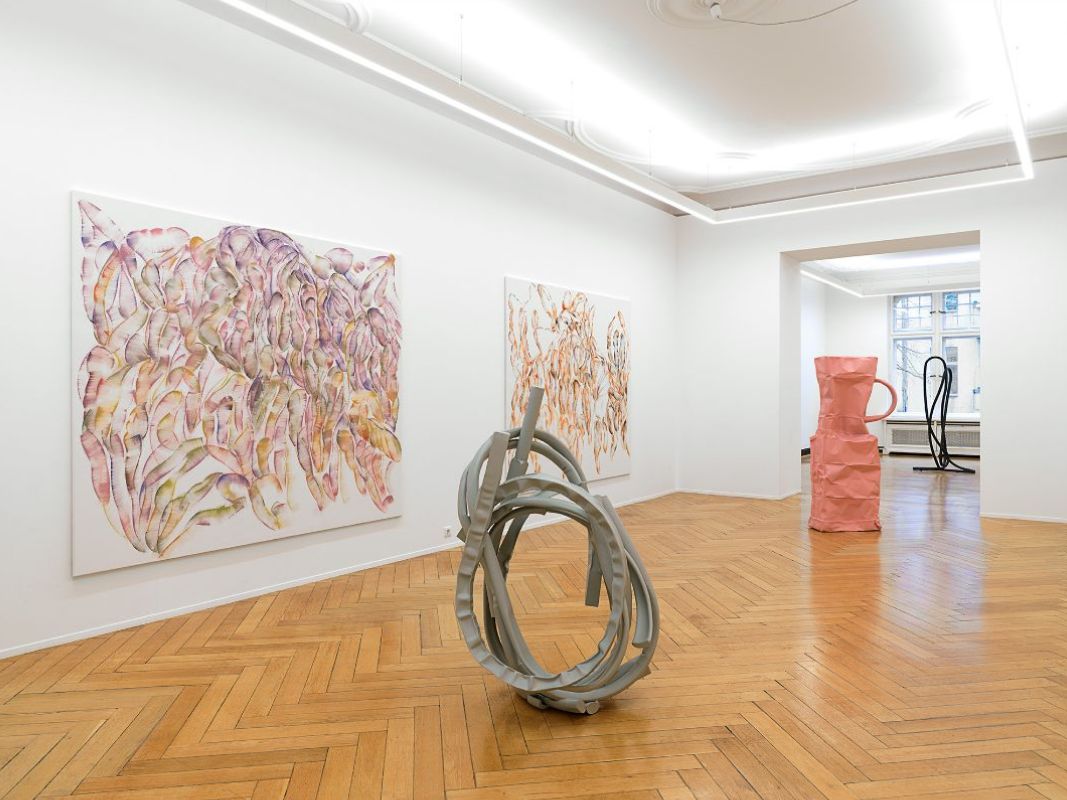 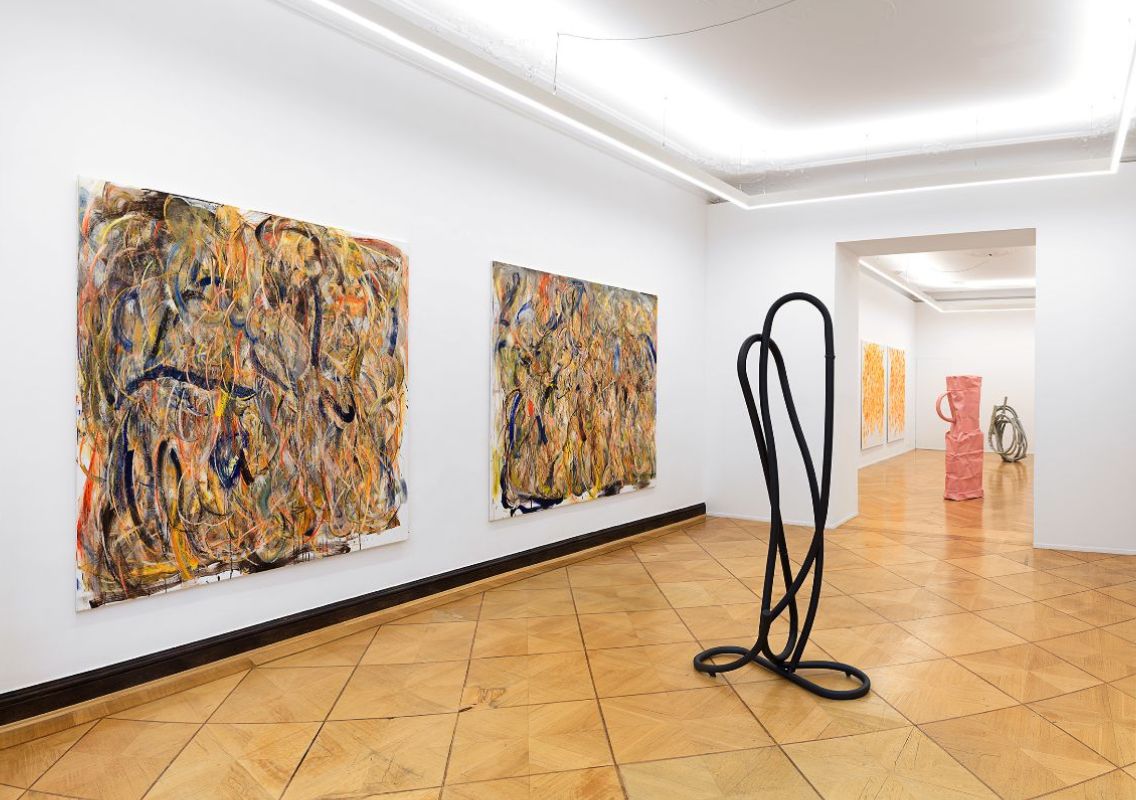 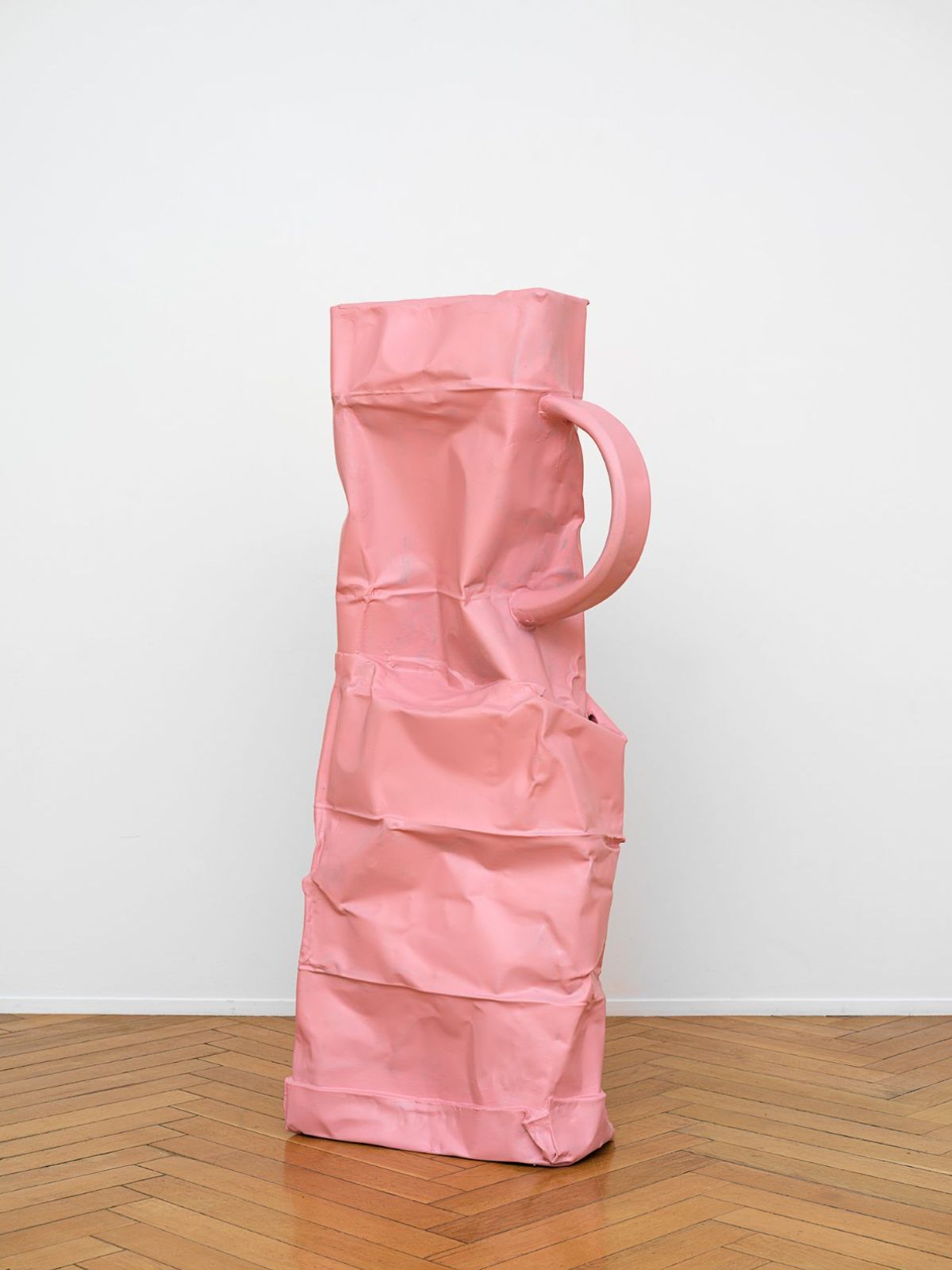 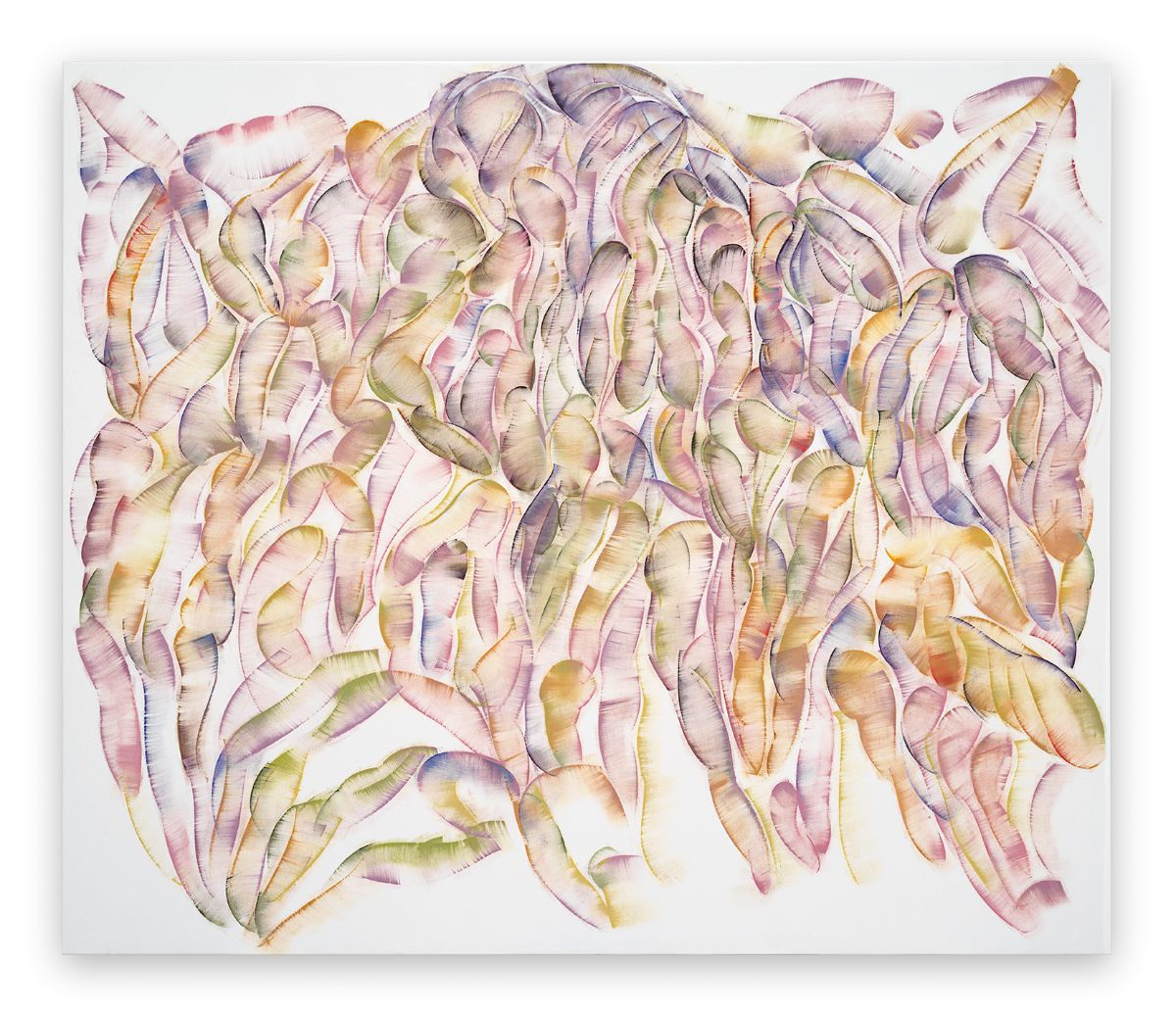 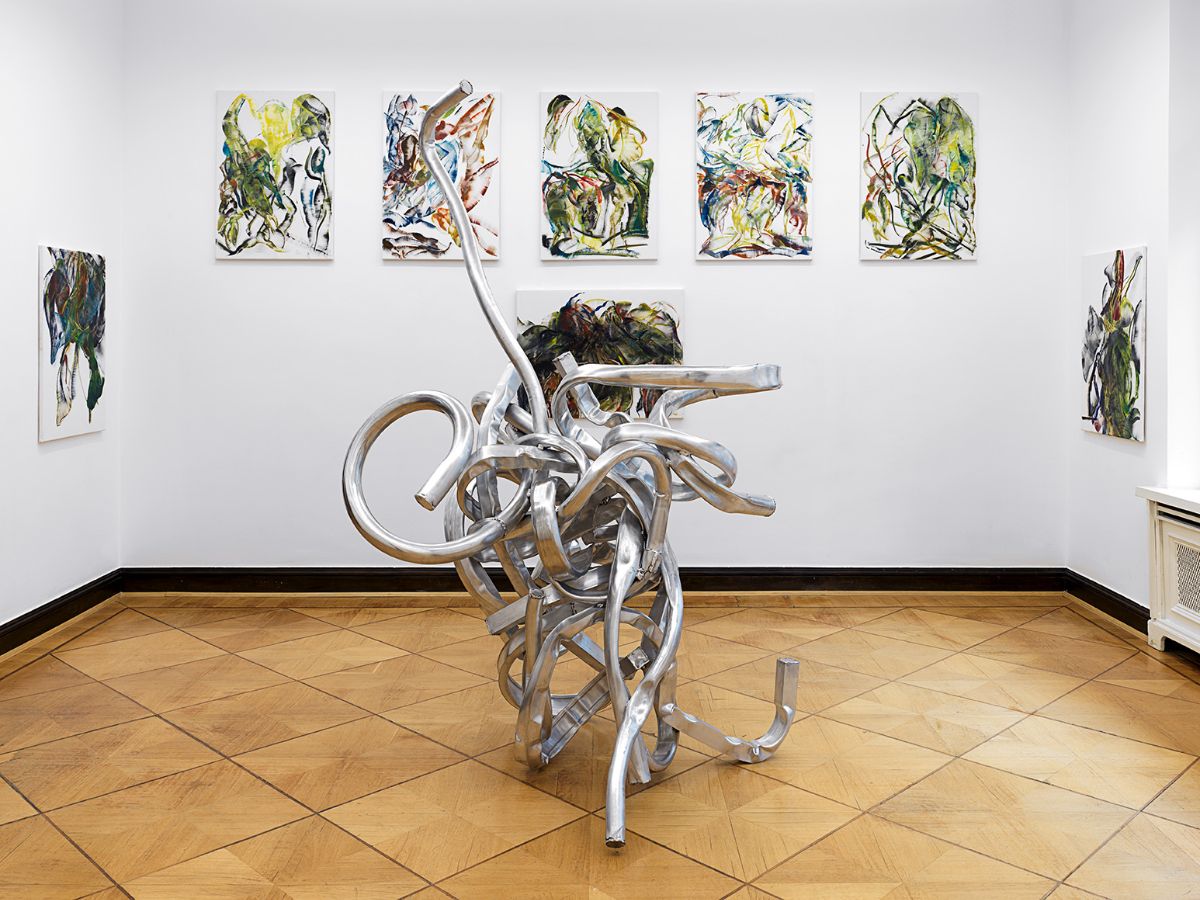 in cooperation with Galerie Nagel Draxler

Robert Grunenberg is pleased to announce the double feature exhibition “Le Kitsch” with works by the painter Matthias Schaufler (1964) and the sculptor Anna Fasshauer (1975) – two artists, who both represent an original position in their respective discipline through their intensive formal and discursive engagement with the figurative and the abstract. Where Schaufler explores the possibilities and limits of oil painting, Fasshauer experiments with the material aluminum in space.

“Le Kitsch” is Schaufler’s first Berlin exhibition since 2014 and shows over 20 paintings in a variety of sizes from the past five years – a kind of mini retrospective. In the three rooms of the gallery, the show is laid out as a chronological tour from 2016 to 2020, which at the same time provides an overview of Schaufler’s latest work, as well as the development of his practice, which documents a balancing act between abstraction and figuration.

“I often relate to myself negatively,” says Schaufler, describing his self-referentiality, “insofar as I do not continuously develop solutions to the problem that I once found.” Thus Schaufler always tries out new color combinations, tools such as spatulas or razor blades, sometimes he dilutes the colors, sometimes he works with more white space, sometimes he fills the canvas almost completely. Nevertheless, all of his works have a high recognition value, a signature that seems to lie in the energetic mark making of the color. For Schaufler, the act of painting often requires the use of the body. The strong movement in front of the canvas, which can range from mere gestures to physical aggression, sometimes creates brute, but also sensual and poetic forms of expression.

Schaufler’s pictures are juxtaposed with four large-format sculptures by Anna Fasshauer from this year, which have a similarly high level of abstraction. In their material experiments, Fasshauer works with raw aluminum, such as is used in drywall and trade fair construction. To shape her pipe sculptures, she uses machines that are normally used for the industrial bending of metal. The wound, knotted and tangled sculptures appear as if they were sketches thrown onto paper, that then grow into three dimensions – like something that was created provisionally with a light hand. Therefore the weight, the dimensions and the machinability of the work could not be in a greater contrast.

With other sculptures Fasshauer uses her body to model by literally hugging them, as in the case of the pink cuboid seen in the exhibition. The coloring comes before the molding. The mostly monochrome lacquer color of Fasshauer’s sculptures blurs the industrial character of the material from which they are made, sometimes it is in the greatest possible contrast to it, such as in the work “Tactical Reserve,” in which metallic hardness and pastel softness meet, and with its handle makes one think of a man-sized travel bag. Similar to Schaufler, Fasshauer plays with the association potential of form, which is just figurative enough that it stimulates the imagination to relate to real things. She succeeds in creating playful and humorous objects from the originally cool, technical material.

The title of the exhibition is a borrowed phrase from the Austrian poet Friederike Mayröcker. She lets this phrase appear in her breathless stream of consciousness whenever poetry threatens to become too clear, because it aims to create a certain feeling without going through the mind and thus threatens to become kitsch. The works in the exhibition also have a dual nature: they are based on a high degree of reflection, at the same time they reach the senses and feelings without detour. Similar to Mayröcker’s poetry, Schaufler and Fasshauer operate outside of defined narratives that lie outside of art itself. Their art is about art and at the same time tells us something about life.

Anna Fasshauer 1975 born in Cologne, Germany lives and works in Berlin. Fasshauer studied Fine Art at the De Montfort University Leicester and received a Master of Fine Arts at the Chelsea School of Art and Design, London.