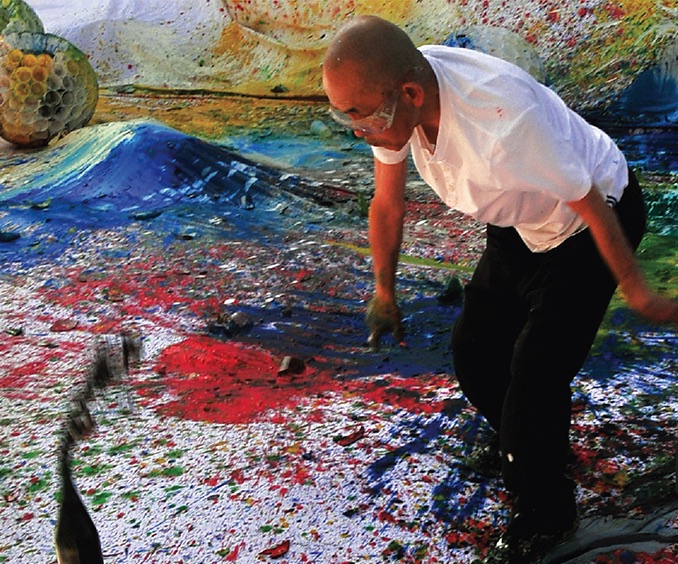 The “SHOZO SHIMAMOTO/MAJOR WORKS” exhibition takes place in collaboration with the Fondazione Morra di Napoli, supported by the Fondazione Cassa di Risparmio di Foligno, with the technical, logistic, and organizational assistance of the Associazione Shozo Shimamoto.
The exhibition offers a detailed and comprehensive review of the Japanese artist’s career, from his first innovative experiments in the 1950s up to the more momentous and spectacular of the last years. In the 1950s, Shimamoto worked largely in the East and especially in Japan, but by the new millennium, he was working mainly in the West, performing many of his actions. The dialectic between these two phases in his output occurs within a unique and extraordinary artistic process. In the 1950s, he began exploring a new concept (and practice) in painting, working with gesture and paint marks, which later evolved into the ‘happening’. In particular, “[t]he power of the mark, that Shimamoto endows with the most authentic meaning of his message, conditions the fluctuation of the paths of written signs that never appear “closed”, developing freely in space, on the other hand, in search of unexplored passages driven by their inner dynamism” (Italo Tomassoni, from the presentation in the catalogue). Nevertheless, the large-scale events of recent years go beyond marks on canvas, favouring a sizeable theatrical edifice with their own dramatic and expressive autonomy, and taking place in public as a unique aesthetic event. For Shimamoto, the work “offers itself to the experience of the artist and the public as though spread out over time, on the infinite horizontality of liquid and multiple spatial displacements” (Tomassoni, ibid).

After a period of inactivity due to Covid-19, the Foligno Centro Italiano Arte Contemporanea opens with an exhibition reflecting its global outlook through this retrospective of Shozo Shimamoto’s historically most significant works. The collection starts with Shimamoto’s earliest pieces from his time with the Gutai Group, moving on to Japanese calligraphy, and culminating with the explosions of colour that characterize his Italian works. The Major Works chosen for this exhibition underline how Shimamoto’s most extraordinary creativity coincides with his use of large surfaces, a constitutive element in his work, denoting both total fullness and, at the same time, a boundary to be continually overcome using colour and matter.

Shimamoto’s large canvases on show at the CIAC take the viewer on a journey that starts with gesture and mark, moving on through colour and contending with matter until it penetrates the deepest and “other” meanings of form. Suspended between heaven and earth, Shimamoto’s artistic gesture creates through these works an empathy beyond time and space.

SHOZO SHIMAMOTO (Osaka, 1928 – 2013) he co-founded the Gutai Group, and – with Jiro Yoshihara – was one of the most experimental artists of the post-World War II period. Gutai, Japan’s first radical art movement, developed from the 1950s, intending to renew the Japanese artistic tradition. For the Gutai artists, the canvas was no longer a mere support; it became the locus of the physical transposition of the artist’s gestures, which, like in American action painting, transformed the work of art into a theatre for action. Shimamoto, a leading figure in the movement, felt the need for new modes of expression, which he found in marks, gestures, and material. The leitmotif in his work is the randomness of which the artist is both protagonist and interpreter through a performative action shared with the public, who witness and complete the scenario desired by the artist. He participated in his first exhibition in 1957: “Gutai Art on the Stage”, at the Sankei Hall in Osaka, where he exhibited his video and sound works. Over the next few years – also thanks to his collaboration with Michel Tapié de Celeyran, the European theoretician of Art Autre – he held exhibitions at important institutions and galleries outside Japan, such as the Stedelijk Museum in Amsterdam and the Musée Cantonal des Beaux-Arts in Lausanne. In the 1990s, he revived the bottle crash technique, enriching it with new meanings; he also created performances in America and across Europe. In 1998 he was named one of the four most representative post-war artists on the international scene, showing his work with Jackson Pollock, John Cage, and Lucio Fontana at MOCA in Los Angeles. The following year, he participated in the 48th Venice Biennale. In May 2006, Fondazione Morra in Naples hosted an anthological exhibition of his work, opening with a performance in historic Piazza Dante accompanied on the piano by Charlemagne Palestine. From 2007 to 2011, he gave key performances in Venice (at the Chiostro di San Nicolò), Capri (at the Certosa di San Giacomo), Genoa (at the Palazzo Ducale), Reggio Emilia (at Palazzo Magnani), and Stockholm (at the Moderna Museet). Examples of his art are displayed in the permanent collections of the Tate Gallery in London, the Centre Pompidou in Paris, and the Galleria Nazionale di Arte Moderna in Rome, among many others. His work also features in several major Japanese museums. Shimamoto died in Osaka in 2013.