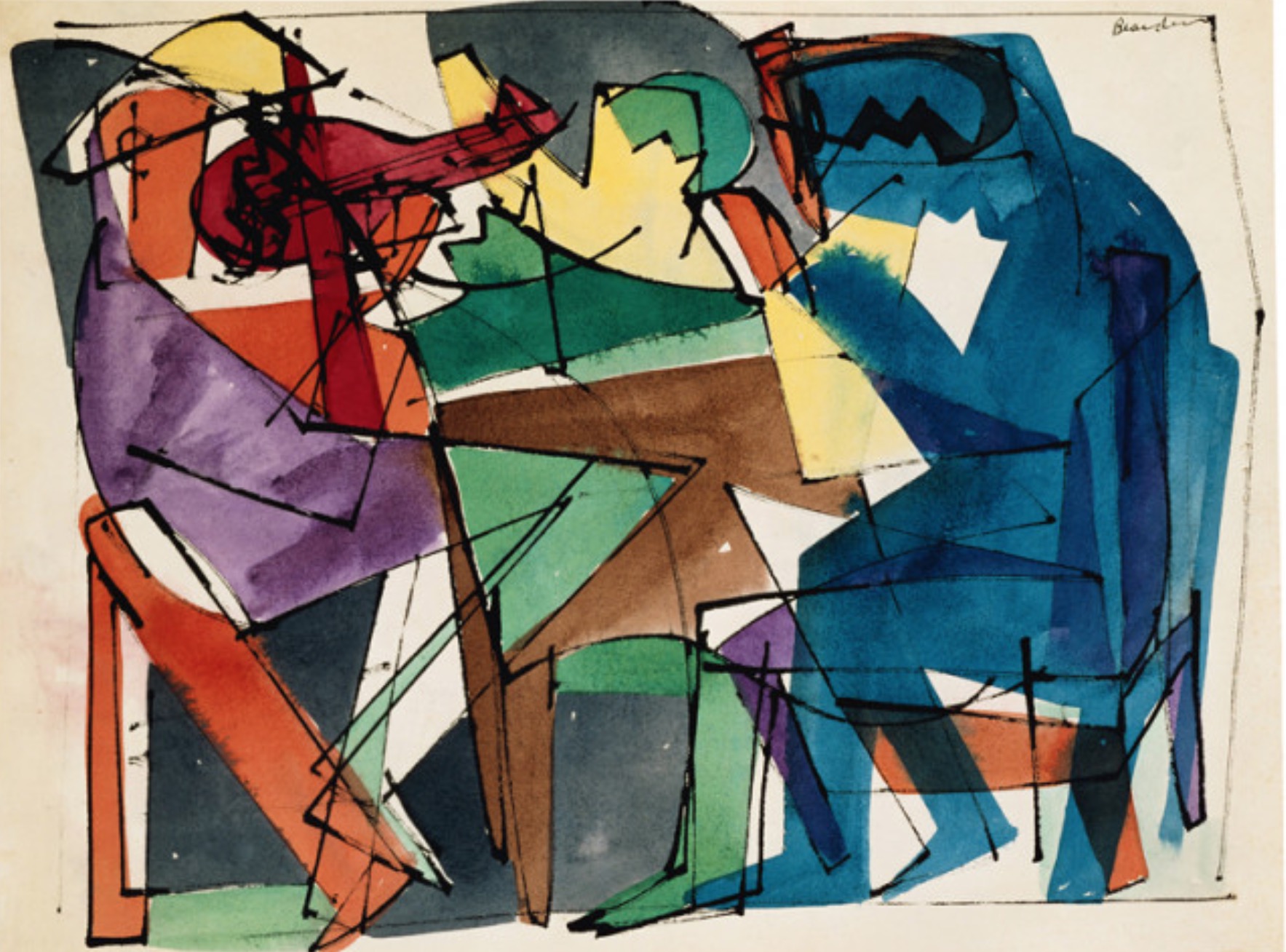 “The...most perplexing problem is the evident pressure exerted on the Negro artist to use his art as an instrument to mirror the social injustices inflicted upon his people,” reads Romare Bearden’s seminal 1946 essay “The Negro Artist’s Dilemma.” We’ll revisit the artist’s perspective in conversation with conceptual and abstract artists of today, including the celebrated conceptual artist Lorraine O’Grady, abstract artist Suzanne Jackson, and abstract and calligraphy artist Shinique Smith.

This event is presented in partnership with the American Federation of Arts.

Lorraine O’Grady is a conceptual artist and cultural critic whose work over four decades has employed the diptych, or at least the diptych idea, as its primary form. While she has consistently addressed issues of diaspora, hybridity and black female subjectivity and has emphasized the formative roles these have played in the history of modernism, O’Grady also uses the diptych’s “both/and thinking” to frame her themes as symptoms of a larger problematic, that of the divisive and hierarchical either/or categories underpinning Western philosophy. In O’Grady’s works across various genres including text, photo-installation, video and performance, multiple emotions and ideas coexist. Personal and aesthetic attitudes often considered contradictory, such as anger and joy or classicism and surrealism, are not distinguished. Even technical means seem governed by both chance and obsessive control so as to express political argument and unapologetic beauty simultaneously. And across the whole, essays and images interpenetrate. While O’Grady’s diptychs are sometimes explicit, with two images side by side, at other times they are implicit, as when two types of hair—silk and tumbleweed, videotaped on the same scalp at different hours of the same day—alternate and interact to create permeating worlds. The goal of her diptychs is not to bring about a mythic “reconciliation of opposites,” but rather to enable or even force a conversation between dissimilars long enough to induce familiarity. For O’Grady, the diptych helps to image the kind of “both/and” or “miscegenated” thinking that may be needed to counter and destabilize the West’s either/or binary of “winners or losers,” one that is continuously birthing supremacies, from the intimate to the political, of which white supremacy may be only the most all-inclusive.

An early adopter of digital technology, O’Grady has also created a website, lorraineogrady.com, which is considered a model of the online abbreviated-archive, and her paper archive is in the collection of the Wellesley College Library. Among O’Grady’s writings, the 1992/94 long-form essay “Olympia’s Maid: Reclaiming Black Female Subjectivity” has proved an enduring contribution to the fields of art history and intersectional feminism. O’Grady’s art works have been acquired by, among other institutions, the Art Institute of Chicago. IL; Museum of Modern Art, NY; Tate Modern, London, UK; Museum of Fine Arts, Boston, MA; and the Whitney Museum of American Art, NY. O’Grady’s first career retrospective, Lorraine O’Grady: Both/And, with catalogue, was presented by the Brooklyn Museum (March 5–July 18, 2021) and travels to the Weatherspoon Art Museum at UNC Greensboro (January 8–April 30, 2022). In addition, her first book of collected writings, Writing in Space: 1973–2019, was recently published by Duke University Press and may be previewed here.

Suzanne Jackson works in Savannah, Georgia, where she has lived since 1996. Her works are known as the “anti-canvases,” these works are highly abstracted, contrasting with her early figurative paintings. She is a 2019 recipient of the Joan Mitchell Foundation Painters & Sculptors Grant, was the subject of a major retrospective exhibition and monograph, Five Decades, organized by the Jepson Center for the Arts, Telfair Museums, Savannah (2019). She has presented solo exhibitions at Ortuzar Projects, New York, O-Town House, Los Angeles, (2019), Danville Museum of Fine Arts, Danville, Virginia (2010), and Fashion Moda, New York (1984). Her work has featured in institutional surveys and historic exhibitions including Life Model: Charles White and His Students, Los Angeles County Museum of Art (2019); West by Midwest, Museum of Contemporary Art, Chicago (2018–19); Soul of a Nation: Art in the Age of Black Power, Brooklyn Museum, New York (2018–19); Now Dig This! Art and Black Los Angeles 1960–1980, Hammer Museum, Los Angeles (2011–13); Gallery 32 & Its Circle, Laband Art Gallery, Loyola Marymount University, Los Angeles (2009); Synthesis, Just Above Midtown Gallery, New York (1974); Directions in Afro American Art, Herbert F. Johnson Museum of Art, Cornell University, Ithaca (1974); and Black Mirror, Womanspace Gallery, Los Angeles (1973). Her work is in the permanent collections of The Art Institute of Chicago; The Baltimore Museum of Art; The California African American Museum; The Indianapolis Museum of Art, at Newfields: The Museum of African American Art, Los Angeles; The Museum of Modern Art, New York.

Shinique Smith is a Los Angeles based painter and sculptor known for her monumental abstractions of calligraphy textiles and collage. Smith’s personal histories and belongings intertwine with thoughts of the vast nature of ‘things’ that we consume and discard and how objects resonate on an intimate and social scale. Over the last twenty years, Smith has gleaned visual poetry from vintage clothing and explored concepts of ritual through tying, writing and gestures inspired by her travels and her early graffiti roots in Baltimore. Through her process, Smith builds a complex material vocabulary that deftly interweaves brushstrokes, private narratives and symbolism for the viewer to divine and intuit. Smith’s practice operates at the convergence of consumption, displacement and spiritual sanctuary, revealing connections across space, time, and place to suggest the possibility of constructing worlds renewed by hopeful delight. She has exhibited over 20 solo presentations at institutions such as California African American Museum, The Frist Center, MOCA North Miami, Los Angeles County Museum of Art and Studio Museum in Harlem.

Her exuberant works are featured in many prestigious collections including Baltimore Museum of Art, The Brooklyn Museum, Denver Art Museum, Minneapolis Art Institute, Museum of Fine Arts, Boston and Whitney Museum. In 2020, Smith was awarded a Tufts Alumni Travel Fellowship and she has also received awards from Joan Mitchell Foundation Tiffany Foundation and Anonymous Was a Woman among others. Smith earned her BFA and MFA from Maryland Institute College of Art where she was also awarded the Alumni Medal of Honor.

With some 55 paintings, works on paper and collages, Romare Bearden: Abstraction is the first exhibition to fully examine and contextualize the artist’s significant body of abstract work. Recognized as one of the most creative and original visual artists of the 20th century, Romare Bearden’s prolific and distinguished career spanned nearly 50 years. This exhibition, which debuts at the Gibbes before traveling to venues across the country, also includes pieces created before and after his most direct engagement with abstraction (among these, the figurative collages for which he is most well-known). The exhibition emphasizes the importance of abstraction in the artist's oeuvre, its significant contribution to the overall Bearden narrative and marks the artist's place within the New York avant-garde of the 1950s-60s.

Romare Bearden: Abstraction is organized by the American Federation of Arts and the Neuberger Museum of Art, Purchase College, SUNY.